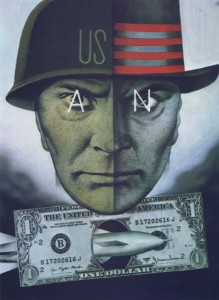 Editor’s Note: This is Part II of a series by former CIA analyst Melvin A. Goodman addressing the presidency and the Pentagon.

Part I examined what President Dwight Eisenhower knew about the military as a retired five-star general and what he tried to impart to his successors. Part III will deal with President Obama’s mishandling of the military-industrial complex's power and what he should do:

Barack Obama’s crippling inheritance as President of the United States is the near-five-decade failure of the nation’s political leadership to heed President Dwight D. Eisenhower’s warning that “in the councils of government, we must guard against the acquisition of unwarranted influence, whether sought or unsought, by the military-industrial complex.”
This complex, according to Tom Barry of the Center for International Policy, has now “morphed into a new type of public-private partnership — one that spans military, intelligence, and homeland-security contracting — that amounts to a ‘national security complex’.”

Over the past three decades, despite the collapse of the Berlin Wall, the dissolution of the Soviet Union, and the end of the Cold War, U.S. presidents have done next to nothing to challenge or limit the national security complex, which continues to drain the federal treasury and block any potential political threat to the military-industrial status quo.

Through this period, reaching from Ronald Reagan to Obama, military spending has continued to increase, with the United States outspending the entire rest of the world on weapons systems.