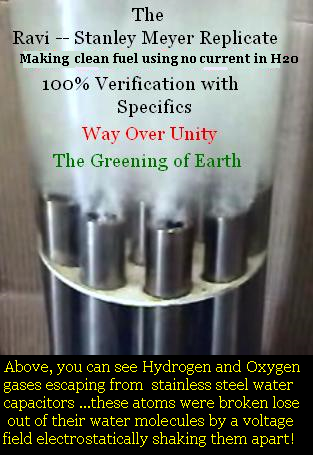 The electrolysis process is not dependent on energy. From Arrhenius theory, molecules in solution dissociate into ions and the ions are collected at the electrode. No energy is required for ionic dissociation and electrolysis processes are so efficient that they are used to measure current e.g. silver coulometer. When we apply this to the dissociation with water, the key requirement to produce .008 gm of hydrogen is that 1 Faraday of electricity flows*. (1 Faraday equals *5,749,296,494? confirm* coulombs). We assume that this is produced by passing 2 amps of current for 96,494 sees, at V* volt, then the energy needed is Vixlx 96,494 joules or 96,494 joules i!e. 96.494 KJ of energy. The same mole of Fb is capable of releasing 285 KJ of energy on combustion with oxygen.

The process of producing H2 from water usually requires an electrolyte to produce it in quantities. It suffers from polarisation at the electrodes with hydrogen collecting there. A number of methods are known for improving the efficiency of the process. In theory the process can be made energy efficient without a breach of any of the laws of thermodynamics.Meyer has obviously discovered some method of collecting the hydrogen different from the traditional methods.

During the course of our stay most of our time was spent discussing the underlying principles behind the technology and the details of the electronics circuits etc. On the second day Stanley Allen Meyer demonstrated a version of his water fuel cell technology which was built in 1982. This demonstration clearly indicated to me that Meyer has developed a novel process for producing hydrogen and oxygen together. This process does not utilise the large currents needed for normal electrolysis. Since my return to Ireland I have studied the literature and compared this with the data supplied by Meyer. I have formed the view that Meyer has developed a novel form of electrolysis water and that this form of electrolysis has the potential to make available more heat energy than the energy input needed to stimulate the process. I have explained this process on the accompanying pages. In all the time I had contact with Meyer, I formed a very positive view of his sincerity and his enthusiasm. From the literature supplied, the patents and equipment shown to us it is evident that Meyer has concentrated his development on producing this water fuel cell in a form immediately suitable for retrofitting to the everyday motor vehicle. To complete this development he has to develop his electronics further to produce an integrated chip and this will take some further months.

I am convinced that the technology demonstrated is a novel and exciting technology and will provide an alternative fuel for use in motor vehicles in the not too distant future. It is difficult at this stage to assess whether its performance as a simple burner will exceed the performance of existing technology from heat pumps etc. The substantial gain to be made if this proves to be the case, however, would justify significant investment to move to the proof of concept stage.Signed: S.Rea O'Neill Culle* oí TechnolojY. Bolton ïW. Colle** é Catering. Catha! Bn*ru Street. Colle« X Corr_T.«xe. Mm. College of Tedinolo*. Kevn So«:. Collet of Mark«r.nS i Da.gr.. Mounno» Square. Colle« .1 Mwu. Ajrinà fW

In ordinary water a small amount of the water dissociates to hydrogen and hydroxyl ions. These ions are immediately hydrated. The amount dissociating depends on the purity of the water and in very pure water is equal to 1 part in 10 million. Normally ordinary water is described as non-conducting. The process has never been fully explained. Hydrogen and hydroxyl ions are constantly being created and then decaying back to water; but there is always a balance between the numbers ionised and the numbers in solution. (See Appendix I for details of the ionic process involved) Under normal electrolysis these ions can be swept to electrodes and neutralised with the opposite charge Hydrogen and Oxygen can be produced, With conventional circuits however, the energy used in collecting the hydrogen is greater than the energy that is available from the hydrogen. Meyer has utilised a novel electronic circuit which produces high voltages but prevents currents from flowing. This circuit is similar to a classical forced oscillation circuit where charge q can go to infinity. (See Appendix II).

The power to this circuit is coming from an alternator which is across a stainless steel capacitor with water between its plates. The dielectric water itself provides the charge to charge up the capacitor and create the high voltage. This charge comes from the hydrogen and hydroxyl ions. The more charge that flows the more the voltage builds up and the more ions are pulled out of solution. The circuit has a high frequency of the order of five Kilohertz superimposed through the windings of the field coils. In addition the circuit is half-wave rectified to allow the capacitor to discharge.

-r- Figi 6A Fig.2. On the charging up side the ions are pulled out of the dielectric and moved towards the metal electrodes. On the discharging side they may go back into solution. The circuit succeeds in increasing briefly the number of ions which are out of solution. A portion of these ions are able to form hydrogen and oxygen by normal electrolysis type processes. The hydrogen and oxygen bubble to the surface. The circuit is novel in that it is a form of electroylsis but there is no need for any net current to flow. While the voltage applied is 2ero the ionised charges are able to recombine without flowing around the circuit and using energy.

DD, I greatly enjoy your comments and hope you continue.  What is 'SF'?  Btw, I'm no bro.  Guess that makes me 'Judastine'?

Well, Judas, I guess that makes you a bright and freakin` shiny star in my universe. You know, what, with this overwhelmingly play-it-safe, ultra-reserved, non-commenting, keep-it-in-the abstract, cuke-buttsd FP `thinkers` crowd, I wonder if they even give a flying -u-- whether any of this -h-- they report is even true or not...or about the wider ramifications it represents for their `reality`. I`m beginning to wonder whether it is time to wander off. When the only guy who knows what`s going down is a Judas, you gotta wonder. Love you too, bro. Like every SF idol of mine, I feel it down deep: it only matters that there possibly exists ONE POTENTIALLY WORTHWHILE READER. F--- the rest. F--- em, and their f-----g horses.

This article is difficult to comment upon. It is combination of truth, possible truth, and a few extremely inaccurate details which might conceivably be merely a language problems or could be an all-too-frequent case of the self-deluding inventor type. The devil is in those details. What I would not do, is rule out the hypothesis of this article out-of-hand, though unfortunately 99% of my colleagues would. I actually am aware of certain "challenges" to the 2nd law of thermodynamics. That "law" is itself a slippery law capable of thousands of different context-dependent expressions that range from statistical mechanics to information theory. In every guise, it is a statistical "law" and this is really key. The stats don't lie in macrocosm or over long time spans, and they are relatively useless in the microcosm and over short time spans. Every distribution has an outlying, quasi-infinite region in which the improbable must happen. Hence, we see quantum tunneling and so many other observed effects. But these improbable events are marked by their extreme INFREQUENCY, rendering them largely useless for most practical applications requiring large outputs over short time spans, such as engines and "generators" of any sort. Also, there is catalysis...a weird thing in and of itself...this is complex stuff.

So be careful. Physicists in the "mainstream" do postulate a lot of really weird things such as an unimaginably energetic "vacuum", virtual photons, and single objects (electrons, even) that definitely occupy multiple positions in "space", "simultaneously", and they then go about proving them definitively in the lab or by observing nature, and these result are independently reproducible, which is the ultimate and only gauge of scientific truth (NOT revelatory, personal truth!!!). It is not a violation of the second law to tap an unrecognized energy source, and this may be behind ALL so called zero-point devices. It is the height of arrogance and stupidity (and also the norm) to assume we have a robust understanding of the universe. But you can take it to the bank that weirdness alone is never a good criterion for rejecting the observed--this is an uncontroversial assertion. "The observed" is the operative phrase. Has the hypothesis of this story really been observed? Reproducibly? It is in fact a credible assertion that the answer might be yes--the extenuating explanation being "suppression by the established monopolists". Conspiratorial suppression is a highly credible assertion, given that other known examples of technology suppression are too numerous for anyone to even tally, and how many don't we even know of? And what those bastards miss, the close-mindedness of most PhD's will readily and unwittingly auto-suppress on their behalf.

But there is also an equally opportunistic legion of ignorance-exploiters who pedal nonsense to a hungry audience of uneducated, credulous joiners and knee-jerk believers. Don't be one of those. Some of us have survived post-secondary indoctrination with our dreams and spirits intact, but not many. IF there is demand on this site for me (and a few others) to do so, we will look more closely into this story and, without producing any gospel on the matter per se, will attempt to lay out these issues for those who are not themselves mathematicians and physicists as best we can. Just ask. Otherwise, BE CAREFUL WITH THIS. IT'S REALLY, REALLY COMPLICATED. ULTIMATELY, IF TRUE, IT CAN BE REPRODUCED. BY YOU.