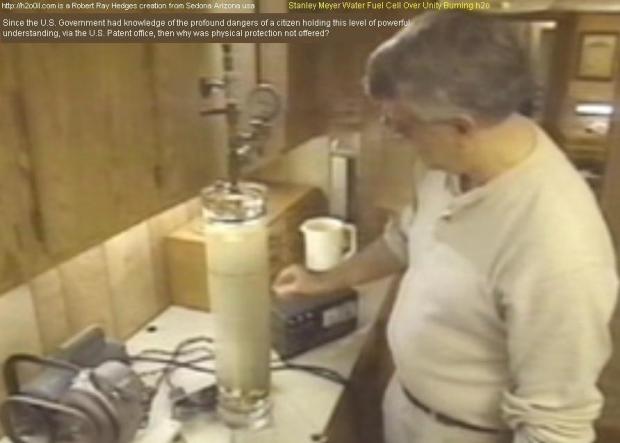 Stanley Meyer may have done exactly that, modifying his dune buggy to run on water alone using the hydrogen to run his dune buggy.

The goal of this web site is to explain the science behind Stanley Meyerâ€™s water fuel cell. As a group we will study his theory, patents, and related information. The objective will be to replicate the water fuel cell. The completion of our work will be proof to the world of the validity of the water fuel cell.
I personally believe in the concept see more here but maybe there is still a element of doubt if he really achieved what he said in running his car using the Water Fuel Cell. He may have thought he had something and just wanted to source more funds so he could fulfill his dream? You have just got to keep a open mind! I still believe In the concept 100% and I believe as I think Stanley did that this will revolutionize the world in using Voltage (Potential Energy) to disassociate the water molecule.

Have you ever thought about water as a fuel source?

The atomic make up of water makes the molecule perfect for a fuel source. The water molecule is composed of two atoms of hydrogen and one atom of oxygen. When the water molecule is separated into its component atoms (H and O) and oxidized as fuel, the resulting energy is two and one half times more powerful than gasoline. The byproduct of the combustion is water vapor. Making water as a fuel, powerful and pollution free!

The problem has always been how to separate water economically. Traditional methods of separating the bond of the water molecule have resulted in failure. To power a car by these methods would not move the car very far. The carâ€™s electrical system could not recharge from the process quickly enough. The result would be a quickly drained battery. For many years Stanley Meyer researched this problem and found a way around it!


1 Comments in Response to Stanley Meyer killed (poisoned) by the Shadow Goverment? But his inventions pops up everywhere

Martyrs usually drive the cause far better than politicians can quell the rebellion.