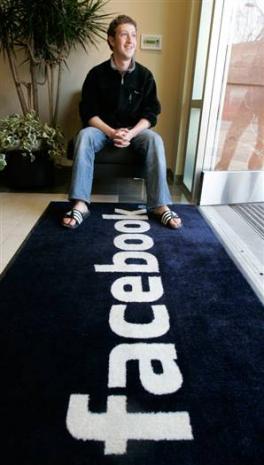 Facebook would benefit from another year of growth absent the added scrutiny that comes with a public listing, instead of holding an IPO in 2011 as investors speculated, said the people, who asked not to be identified because Facebook doesn’t discuss share-sale plans. Still, Zuckerberg, who holds board control, could push for a stock sale at any time, they said.

Waiting lets Zuckerberg, 26, hone the skills needed to steer a company that issues quarterly results while facing criticism on such matters as user privacy. Facebook, valued at $24.9 billion, would use the time to propel its user base beyond the 500 million mark reached this month and add to sales that two of the people said may double to at least $1.4 billion in 2010 from $700 million to $800 million last year.

“The burden of being public has never been greater,” said Kevin Landis, who manages about $260 million at Firsthand Funds in San Jose, California, and has invested in the technology industry for 16 years. “Zuckerberg doesn’t have to put his name at the bottom of four 10-Q statements every year and attest that everything in there is true or else he’s responsible. The minute it’s public, he does.” Landis doesn’t have direct knowledge of Facebook’s IPO plans.

Good, just enough time for it to die... like MySpace. Diaspora!