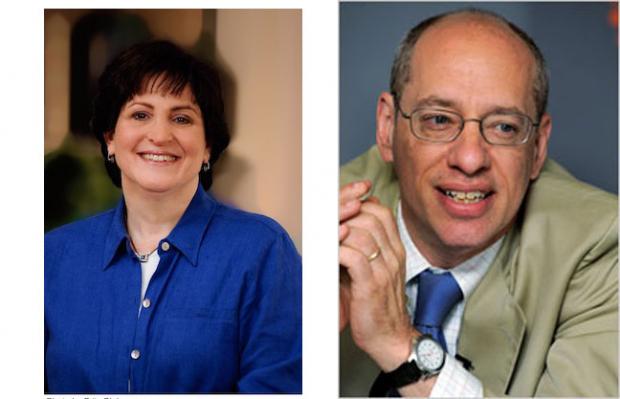 Jon Leibowitz and Ruth Marcus married in 1994. They were the perfect Washington power couple: He was chief counsel to Sen. Herb Kohl (D-Wisc.) and she was a White House correspondent for the Washington Post. Sure, they were just cogs in the establishment, but they were still part of America's ruling class. And over the next decade-and-a-half, they solidified that standing. Marcus – who has worked at the Post for twenty-six years – rose through the ranks to become a member of the paper's editorial board and a regular op-ed columnist. Leibowitz remained with Sen. Kohl until 2000, when he joined the "private sector" as a lobbyist for the copyright industry (aka the Motion Picture Association of America). But in 2004 he returned to his natural habitat, the government, when he received one of five seats on the Federal Trade Commission.

Leibowitz had no special qualifications to sit on the FTC aside from his long association with Kohl, a senior Democrat on the Judiciary Committee, which oversees the Commission. Although the FTC has jurisdiction over virtually all American business activities, Leibowitz himself had never worked for a private business – his entire professional life was inside Washington as part of the political system. Leibowitz did not even have substantive experience practicing antitrust law, the FTC's primary reason for being.

Indeed, Leibowitz's appointment was a mere afterthought. Then-President George W. Bush had two seats to fill on the FTC. The Commission's authorizing statute says no more than three of the five commissioners may belong to the same political party, ensuring both halves of the nation's political duopoly are represented. Bush had named Deborah Majoras, a Republican antitrust lawyer who previously served as the number-two official at the FTC's sister agency, the Justice Department's Antitrust Division, to the first seat (she would also be designated as chairman). Bush needed a Democrat for the other seat, so Kohl and his Senate Democratic colleagues recommended their former lackey, Leibowitz.

The Senate conducted only a superficial review of the two nominees. The website Tech Law Journal described the Majoras-Leibowitz confirmation hearing in June 2004 thusly:

The hearing did little to establish these nominees' positions on technology related maters within the jurisdiction of the FTC, or their qualifications to be Commissioners. Rather, most of the hearing was taken up by partisan election year posturing on issues largely unrelated to matters that will be decided by the FTC.

Both nominations were held up by Sen. Ron Wyden (D-Ore.), then facing a tough reelection campaign, who delayed a confirmation vote on the grounds that Majoras was too close to the oil industry – which Wyden felt the FTC should regulate more harshly. Bush then gave Majoras and Leibowitz recess appointments, and after the election, the Senate unanimously confirmed both now-commissioners to full terms.

Years later, Ruth Marcus would criticize President Barack Obama for using the same type of recess appointment that put her husband on the FTC. Last month Marcus attacked Obama's recess appointment of Donald Berwick as the regime's new Medicare and Medicaid overlord as an "outrageous" abuse of power. The Huffington Post later contacted Marcus, who explained why she was not a hypocrite: "It boiled down to her husband (a Democrat) being a different case because he had a hearing and wasn't controversial."

It's true that Leibowitz was not controversial. He is an unremarkable man in every sense of the word; someone who proves that it's better to be lucky then talented. He proved as much when Obama became president and needed a new FTC chairman. Leibowitz was the only partisan Democrat then serving – there was a Democrat masquerading as an "independent," but her term was expiring – so he got the promotion. Obama later gave Leibowitz a Democratic majority, appointing Edith Ramirez, an antitrust lawyer who just happened to be an old law school (and law review) classmate of the Chosen One at Harvard; and Julie Brill, a career deputy state attorney general and longtime friend of Senate Judiciary Committee Chairman Patrick Leahy (D-Vt.). Neither nominee faced so much as a disparaging word on the Senate floor.