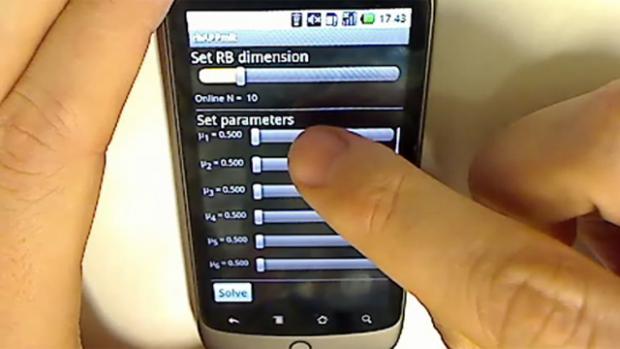 There’s an app for almost everything. Now add one that can run calculations from a supercomputer on a Nexus One phone in real time and without the need for internet connectivity.

Researchers at Massachusetts Institute of Technology and Texas Advanced Computing Center have created an Android app that can take simulations from the powerful Ranger supercomputer and solve them further on the mobile phone.

“The idea of using a phone is to show we can take a device with one chip and low power to compute a solution so it comes as close to the one solved on a supercomputer,” John Peterson, a research associate at the Texas Advanced Computing Center, told Wired.com.

Many researchers depend heavily on supercomputers capable of millions of calculations per second to simulate problems and advance their studies. Texas Computing Center’s Ranger supercomputer went live in 2008 with 62,976 CPU cores, 123 terabytes of memory, 1.73 petabytes of disk space and 579.4 teraflops of performance.

But massive machines such as the Ranger are not easily available. Researchers have to book time on them and they aren’t available for computations that need to be done quickly. Supercomputers also can’t be carried into field experiments. Having a device in hand that could help solve a problem quickly can be handy.

Tech showcase CES will return in-person in Las Vegas next January but with fewer...

LG is quitting the smartphone business