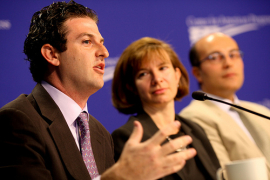 Google plans to launch a new policy organization called Google Ideas, which appears to be a Googley take on the think tank

Jared Cohen, who until recently was employed by the U.S. Department of State, will lead the new division of Google starting in mid-October, he said in an interview with Foreign Policy magazine tweeted by Google CEO Eric Schmidt. Cohen has been known as a digital guru for the State Department, helping focus attention within the government on emerging social-media technologies like YouTube and Twitter.

Google Ideas will examine a wide range of issues, according to Cohen: "... the range of challenges that it may focus on include everything from the sort of hard challenges like counterterrorism, counterradicalization, and nonproliferation, to some of the ones people might expect it to focus on, like development and citizen empowerment." Cohen is calling this a "think/do tank" in the sense that Google Ideas will attempt to put some of the concepts it generates into action by working with government and third-party organizations.

Google already operates Google.org as an idea factory for topics a little outside of its core business, such as Google PowerMeter and Google Flu Trends. And Schmidt is a member of the Council of Advisers on Science and Technology, which provides advice on technology issues to President Obama.

Google and the State Department bonded earlier this year over Google's dispute with China over censored search results, leading to a policy speech on Internet freedom by Secretary of State Hillary Clinton that invoked Google on several occasions. Last year, Cohen was said to be behind the government request that Twitter delay scheduled maintenance during a critical period for street protests in Iran.

The more Google gets in bed with government the less inclined I am to give them my business. A think-tank is one thing, but one led by government scum is another thing entirely. And really, Google, I don't want you to solve all the world's problems yourself. Making great web software was just fine with me.