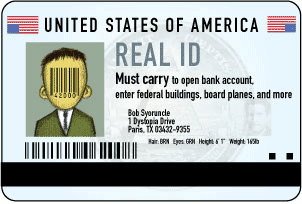 There are a number of proposed "solutions" to address the issues of terrorism and illegal immigration. Within these proposed solutions there is a common denominator, biometrics. This document presents an alternative solution to national/international identification documents that incorporate biometrics. Perceived security is not real security.

Currently the "Real ID Act 2005" is federal law. The Real ID Act calls for federal guidelines for state driver's licenses. The standard for the digital facial image/photograph is an international standard adopted by the International Civil Aviation Organization, an agency of the United Nations.

In 2001 facial recognition technology was used to capture the image of the people that attended the "Super Bowl". The captured images were then compared to law enforcement databases. Since 2001 facial recognition has been used many times in public places. A person's facial image is captured either by the use of CCTV (Surveillance cameras or hand held biometric devices, similar to cameras that connect wirelessly to databases).