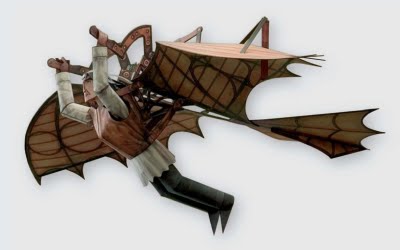 A Canadian university student has done what Leonardo da Vinci had only dreamt of: Piloted a human-powered "wing-flapping" plane! Called an ornithopter, and the inspiration for modern day helicopters, the machine was first sketched by da Vinci way back in 1485 and never actually built.

Todd Reichert, an engineering student at the University of Toronto, made history by sustaining flight in his ornithopter

HPO Flight from U of T Engineering on Vimeo.

2 Comments in Response to Student flies like a bird, powered only by himself

I'll have to go with you on that one Brockster but ornithopters have been the stuff of scifi for decades and hells man, how long and far was the first signature Wright Brothers flight?

Dude. The thing was waving it's wings. I never seen an aircraft do that. And stay aloft. And not instantly fall like a house of rather heavy and lethal cards. And now I swing my turret around and direct heavy fire. Brockster, can you make a machine that flaps it's wings? Bet you can. Can you build an ornithopter that can actually stay aloft somewhat longer than my faith and trust in my wife, my dog, my kids or my truck?

Hells bro, I'll rip anybody to shreds based on ideology or philosophy but one thing I can't do is build a machine that flaps it's wings. I was metallurgically freaked.

Dunno Brock, to do you an injury (not even close to deserved) but I find your writings to be derivitave. And occasionally making leaps and bounds the verge on the incohate. Well, you have just had the dubious honor of being called derivative and incohate by one of the best in the business. The difference here is I'm looking for what happens in a person's mind when I confound and foible them. You are a dude who is trying to make sense (and dollars and cents) so pick a side and stay on it.

If that ain't plain for what are obviously your mid-Western (fly-over) mentality, let me make this clear: you are stepping on my toes if you deal in confusion. That's my territory bra and I'm better at it than you. Your game is making sense and being rational. As long as we have this understanding, we will get along just fine.

If this thinly veiled threat isn't enough for you, there are all sorts of dirty tricks we can play on you but our dirty tricks are worse for the wear in the modern era. In times past, if we could find no moral and ethical fault with you, we would spread the word that your livestock was somehow perverted: your horse is Jewish and your goats are Godless anarchists. In the olden days that was enough to raise suspicion in the ladies church social bible study but no more. Now we have to resort to even more underhanded tactics to maintain our hegemony of being the worst insufferable bastards we can be.

So I'll put it even plainer: you f*cking rationalist, I just barely had this hippy chick ready to go to bed with me but you have to go and get me into a freaking dialog about ornithopters instead of grabbing a handful and for that, my man, my mello fellow, bra, I hate you permanently and eternally.

And if you took anything I said above seriously, you have fallen into another Oyate trap. Only one person on this board didn't fall for my bill of goods: none other than Frosty Woolridge. The Frosterizer. Frosternoonovitch. I ranted on him for 5 pages worth and he simply replied "I bow to your superior wisdom". Thus constituting the greatest victory and defeat in my life in one short sentence.

Whip it out Brock.

We'll have to wait for the control flight data, but I'd be willing to bet the flapping actually decreased the glide ratio.

100-Year-old Dreams of Airship Travel Through Europe are Revived With...

Got jab? No more fly.