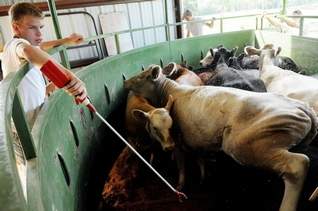 QUEENSLAND teachers would be given Taser stun guns to control unruly students under a leaked State Opposition draft policy.

A spokesman for Mr Langbroek yesterday admitted the stun gun idea - presented the same as other Opposition policy formulation documents - was created in the Liberal National Party's parliamentary offices.

Amid conflicting allegations over which of Mr Langbroek's policy advisers created the document, the spokesman yesterday claimed the plan was a joke among several staff, the Sunday Mail reported.

"Only a handful of staff had shared the joke without the knowledge of any MP," the spokesman said.

"The chief-of-staff made it clear that these types of jokes were unacceptable."

But the Bligh Government insisted the document promoted child abuse and showed that the LNP had no respectable policies to be fit to govern.

The damaging leak follows a horror week for Mr Langbroek, whose leadership was under threat after he dumped an outspoken shadow minister.

The document, which was shared among policy advisers, said giving teachers Tasers would provide a valuable discipline tool, allow control of the entire class without physical contact and ensure class concentration.

It also noted that the cost of a roll-out could be offset by financial and social benefits including decreased expenditure on stress leave for teachers and decreased rates of anti-social behaviour.

"The most common complaint from teachers is that there are no alternatives for discipline," the document said.

"In previous years, they had a choice - limited to wooden products but a choice none the less."

Acting Premier Paul Lucas yesterday said the leak was "right from the top".

"If any parent put a Taser on a child, they would be in the District Court staring down the barrel of a jail sentence - and they are suggesting they have staff who think child abuse is a joke," he said.

"It is a further illustration, as we have seen over the last few days, of their lack of unity and their disintegration."

"It's absolutely ridiculous," she said. "We want some positive real policies that are workable. If it is a practical joke, then it is a very distasteful one."

Mr Langbroek had "terminated the contract of one of the staffers involved", his spokesman said yesterday, but there are conflicting claims over who created the document.

LNP economic policy adviser Pete Coulson was sacked after he was caught sleeping in his office at the end of a parliament week.

He was woken by a colleague after the hour-long snooze on September 3 and was dismissed soon after.

But the Taser document appears to have been created on August 13.

Mr Coulson yesterday said he did not create the document and his dismissal was related to other issues. "This was not my policy area and I did not write that document."

1 Comments in Response to Tasers for Teachers

Parents, why is OK for one state actor to threaten or use electo-torture on kids but not another?