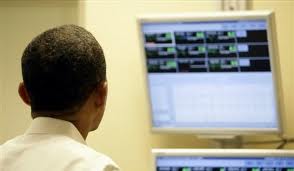 In a reprise of the crypto wars of the 1990s, the U.S. secret state is mounting an offensive that would force telecommunication companies to redesign their systems and information networks to more easily facilitate internet spying.
Touted as a simple technical “fix” that would “modernize” existing legislation for wiretaps, government security officials will demand that telecommunication firms and internet service providers provide law enforcement with backdoors that would enable them to bypass built-in encryption and security features of electronic communications.

With the Obama administration rivaling, even surpassing antidemocratic moves by the Bush regime to monitor and surveil the private communications of the American people, The New York Times reported last week that “federal law enforcement and national security officials are preparing to seek sweeping new regulations for the Internet.”

Following closely on the heels of FBI raids on antiwar and international solidarity activists, the “change” administration now wants Congress to require all providers who enable communications “to be technically capable of complying if served with a wiretap order.”

Is It Only Spy Powers Obama Wants, or
Make a Comment (1) • Email Link • Send Letter to Editor