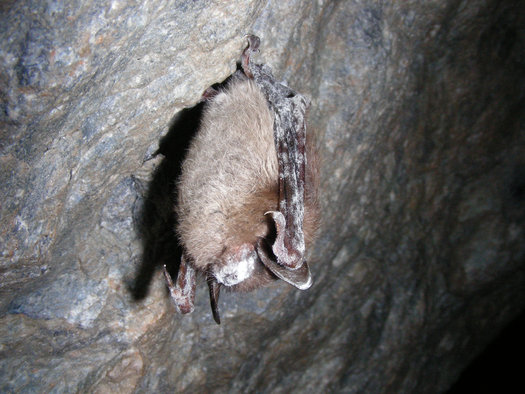 Tom Kunz has been studying bats throughout New England for more than four decades. In annual treks to remote caves, he and other researchers from Boston University capture bats, banding them to track their migration patterns and movement over the years. During trips to bat hibernacula—the bats’ winter hideouts—he grew accustomed to cave walls covered in huddled masses of bats, tens of thousands strong. Aeolus Cave in Vermont, the largest bat hibernaculum in the northeast, has long been a winter home for more than 100,000 bats. Kunz regards them fondly, like old friends. What he sees today brings him to tears.

Two years ago, a new, potent fungus was found rampaging through New York, Vermont and Pennsylvania, wiping out entire colonies of bats Kunz had studied since the Johnson administration. He and a group of graduate students visited Aeolus in January 2009 and were appalled at what they saw: Tracks in the snow made by crawling, starved bats; birds eviscerating bat carcasses outside the cave entrance; bats frozen into ice stalagmites, having died while trying to climb to higher ground; and a cave carpeted in bat bones.

“You couldn’t step on the cave floor the last two winters without walking on dead bats. It was just horrible,” Kunz said. “I’m not an emotional person, but I was in tears when I saw this ... it’s just devastating. It’s unprecedented in the annals of science.”

As cold weather approaches, researchers are bracing for countless more animals to succumb to white-nose syndrome. Meanwhile, biologists are using laser cave-gates, infrared cameras, temperature-sensitive radio transmitters, genetic testing—even artificial caves to follow the bats and the fungus. They’re hoping technology can lead them to clues about how the fungus evolved, why it is harder on certain bat species than on others, and maybe, how to stop it.

“With our traditional methods, we’re stumped, so we are trying to figure out what we can do. We really look to technology to help us answer some of these questions,” said DeeAnn Reeder, a biologist at Bucknell University.

Since 2006, about a million bats in the northeastern United States have died during hibernation. The culprit is white-nose syndrome (WNS), caused by a fungus called Geomyces destructans that biologists believe arrived from Europe. The bats awaken every few days, burning their precious fat reserves; ultimately, they freeze, starve to death or are picked off by opportunistic predators.

A study published in the journal Science in August suggested things will get even more dire for the little brown bat, the most common bat species. In the worst-case scenario, the study points to a regional extinction of 99 percent in 16 years. It’s a grim picture, said Winifred Frick, lead author of that study and a postdoctoral researcher at the University of California-Santa Cruz.

“These weren’t like slowly declining and this thing is starting to get them. They were doing fine,” she said.

Bats are highly social, hibernating in close quarters over winter and traveling over long distances to mate. G. destructans likely spreads from bat to bat, but researchers think humans could spread it, too; earlier this month, the US Fish & Wildlife Service closed caves in national parks and abandoned mines throughout the West, hoping to prevent unwitting spelunkers from spreading the fungus. The FWS also awarded $1.6 million to study the disease.

1 Comments in Response to Racing to Save Bats From Catastrophic Extinction, Biologists Turn to New Tools

Let them evolve for fuck's sakes!