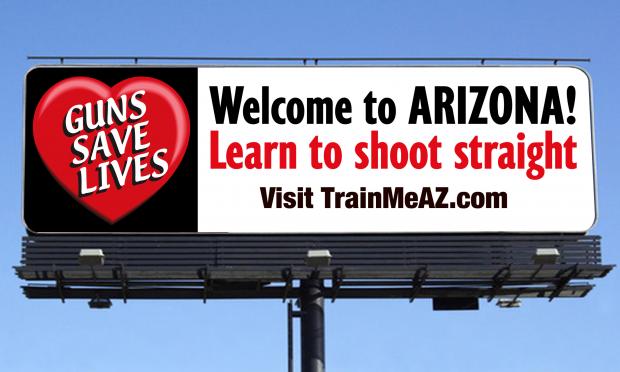 The city of Phoenix, in an apparently arbitrary move and without formal legal process, has forced CBS Outdoors to tear down 50 illuminated bus-shelter billboards under contract to promote gun safety training for children and their parents.

The posters were placed by TrainMeAZ.com, a commercial joint-educational effort of the firearms industry in Arizona, and had been up all over the Phoenix metro area for a little over one week before the city acted.

“The Phoenix attorney’s office claimed these were public service announcements, and those are banned,” said Alan Korwin, manager of the TrainMeAZ campaign and the Publisher at Bloomfield Press, a sponsor of the program. “It’s a bogus excuse — and they know full well we’re an LLC and not a non-profit. The commercial sponsors, shooting ranges and trainers on the website expect to attract customers. The ads are aimed at parents, so they can teach gun safety and the values of marksmanship to their kids,” he said. “We’re promoting a culture of marksmanship, where everyone learns to shoot and understands gun safety.”

Assistant Phoenix city attorney Ted Mariscal claimed in a conference call with Mr. Korwin and CBS Outdoor that the billboards weren’t commercial enough, the message was too vague, and then demanded the message be changed to his satisfaction. When pressed for a definition of what is either sufficiently commercial or what defines a public service ad he declined to respond, referring instead to a 12-year-old 9th Circuit court case concerning a religious group (Children of the Rosary) and abortion ads. CBS is designing new art to please the city, but without guidelines of what’s acceptable, there’s no way to predict the result, and the TrainMeAZ campaign isn’t exactly keen on this approach.

Mariscal offered to provide the case he says matters, and the lease agreement he says allows the city to remove the ads. The case is now under review. No lease agreement has been provided, and the city apparently has no definitions in place, apparently leaving Mr. Mariscal to act on his own unfettered accord. Nothing in the city’s advertising guidelines, provided by Mr. Mariscal, appear to justify the censored ads.

In the meanwhile, TrainMeAZ is losing more than 800,000 impressions per day it had been receiving through this Phase One of the campaign. A bulletin billboard with a similar message and goal remains up on Interstate 17, through another company. It gets about 135,000 eyes driving by daily (facing southbound traffic near Peoria exit). Several outdoor advertisers have contacted TrainMeAZ in an effort to pick up the lost business for themselves. CBS has offered a slate of city billboards to replace the messages the city has banned.
Read Full Story

View all the Billboards here

Building a Tiny House in Arizona - Is smaller better here in the desert?