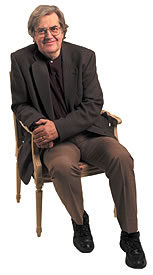 
The reasoning and analytical skills that Butler Shaffer developed in law school where he served as associate editor of the law review, have helped him pursue "the continuous process of inquiry that Socrates referred to as 'the examined life.'"

From the view of a "modern social historian and philosopher," Professor Shaffer has written numerous books and articles on social theory, business and labor law, and has spoken on these topics before a variety of academic and special interest forums. In his book, Calculated Chaos: Institutional Threats to Peace and Human Survival, he explores the theory that "institutions are the principle means by which conflict is produced and managed in society." He considers how leaders of industry influenced the creation of the New Deal's National Industrial Recovery Act of 1933 in his book, In Restraint of Trade: The Business Campaign Against Competition. Professor Shaffer has also been interviewed on these subjects on network television, cable and radio.

Following graduation from law school, Professor Shaffer was a labor relations consultant to the Midwest Employers Council in Lincoln, Nebraska, and went on to establish a private law practice in Omaha. He subsequently joined the firm of Nelson, Harding, Marchetti, Leonard & Tate, and then began a career in academia at the University of Nebraska College of Business Administration where he taught courses in business and law. Professor Shaffer has been a member of the Southwestern faculty since 1977. In 2002, he was named as the Irwin R. Buchalter Professor of Law in recognition of his outstanding contributions to legal education and scholarship. He says, "I like to explore, with my students and in my research, the nature and purpose of governmental regulation of economic activity."

IN RESTRAINT OF TRADE: THE BUSINESS CAMPAIGN AGAINST COMPETITION, 1918-1938 (Bucknell University Press, 1997)

"Introduction" in OUR ENEMY THE STATE (A. Nock; republished by The Ludwig von Mises Institute, 2009)

"Where Matters Stand" in THE WIZARDS OF OZYMANDIAS: REFLECTIONS ON THE DECLINE AND FALL (E-book, lewrockwell.com 2008)

"Who Authorizes the Authorities?" in FACETS OF LIBERTY: A LIBERTARIAN PRIMER (L. Samuels, editor; Freeland Press, 1985)

"In Restraint of Trade: Trade Associations and the Emergence of 'Self-Regulation,'" 20 SOUTHWESTERN UNIVERSITY LAW REVIEW 289 (1991)

"What I Wish They Had Told Me on My First Day of Law School," SOUTHWESTERN LAW (Fall 1988)

"Why Tolerate the Hypocrisy of Equal Justice Under the Law?" LOS ANGELES DAILY JOURNAL (May 1986)

"Too Often the Quest for Justice Becomes a Scramble for Power," LOS ANGELES DAILY JOURNAL (May 1985)

"Why Rent Control Doesn't Work: A Matter of Cause and Effect," LOS ANGELES DAILY JOURNAL (May 1985)

"The Unwritten Law: Innocent Until Proven Guilty; Familiar Saying Is a Product of Science, Not a Notion of Liberty," LOS ANGELES DAILY JOURNAL (April 1983)

"The Notion of an Independent Judiciary Is Only a Myth: The Courts Have Always Been Political Bodies, and They Always Will Be," LOS ANGELES DAILY JOURNAL (July 1983)

FTX Implosion Leads to Chaos in the Streets - Bix Weir

Letters to the Editor •

Bernie Sanders at RMT rally in London: Hawking the myth of a trade union revival

DOES SPARING THE ROD REALLY SPOIL THE CHILD?