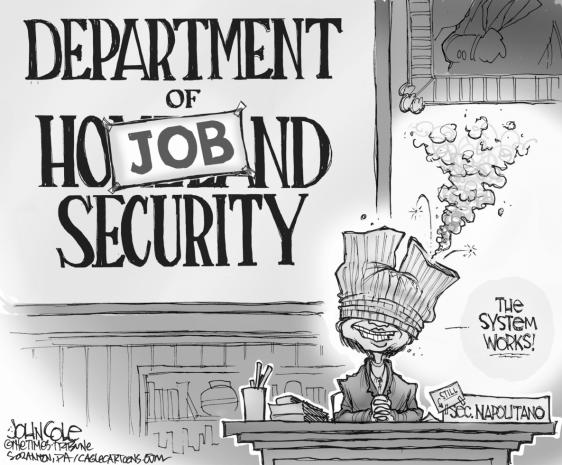 Ryan Air chief executive officer Michael O'Leary predicted it, and sure enough, Britain enacted barn door restrictions in response to the Oct. 29 discovery of bombs inside toner cartridges in printers shipped as cargo from Yemen to the United States via Britain.

The proverbial closing of the barn door after the horse has bolted came when British aviation authorities announced a restriction on printer toner cartridges weighing more than 1.1 pounds in carry-on bags. The restriction is expected to last at least a month. Both British and American aviation authorities are now treating all packages originating in Yemen as potential terror threats.

The predictability with which aviation authorities will enact cumbersome and sometimes ludicrous barn door security procedures after an aviation threat was the subject of jokes when Christmas Day bomber Umar Farouk Abdulmutallab was arrested in Detroit in 2009 with a bomb in his underwear.

Comedian Jimmy Kimmel captured the sentiment of the public toward restrictive aviation rules enacted after security incidents, joking, "You know, after the shoe bomber, they made us take off our shoes. Now, this underwear thing, could be a real problem. I wonder if mothers of terrorists tell their kids to wear clean underwear in case something great happens."

While the Transportation Security Agency has not gone so far as to require passengers to remove their underwear for inspection, it did enact more stringent rules in the wake of the Christmas Day incident. These rules included increased pat downs and carry-on searches for passengers from 14 nations. Initially, the TSA banned passengers from leaving their seats -- even to use the bathroom -- or having anything on their laps during the last hour of international flights or using blankets, but let up on those rules fairly quickly in the face of passenger outrage and disbelief.

Back in 2002, Richard Reid "the shoe bomber" attempted to ignite a fuse on his shoe while in flight. Since then, the TSA has required all plane passengers to remove their shoes when going through security, a requirement that many passengers consider not only burdensome but absurd. And even with full body scans now prevalent in airports, shoe removal continues to be required with security officials contending that the scans cannot fully penetrate shoes.

In 2006, liquids and gels in carry on bags were banned after a security scare. A month after the ban took effect, it was eased and now takes the form of a stringent quantity restriction coupled with a segregation and bagging requirement.

Some of the most stringent and ultimately unrealistic of the travel bans were enacted in the desperate months after terrorists turned planes into bombs on Sept. 11, 2001. Because the terrorists were armed with box cutters, the government banned a laundry list of sharp objects from flights including personal care items such as nail clippers and safety razors.

Several other speakers at the U.K. Airport Operators Association annual conference noted that each security scare becomes the impetus for a new round of security procedures and suggested that the government cease handling air security in this manner.