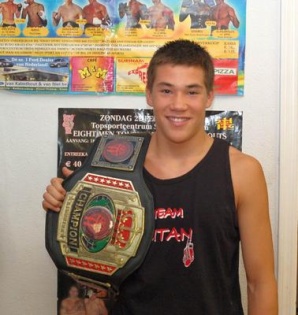 Jordan Decker worked too hard, both inside and outside of the ring, to come away from the World Kickboxing Association world championships without a title.

In addition to countless hours of training, Decker had to raise more than $4,000 to pay for the trip to Edinburgh, Scotland.

The 17-year-old Chandler resident's efforts paid off, and he won the 160-pound junior-division championship on Oct. 28. Decker beat Dominique Gabler of Germany by unanimous decision.

"It was a feeling of both relief and accomplishment," Decker, who trains at Sitan Gym in Chandler, said. "I worked really hard for it, and after I won, there was a great feeling of accomplishment. After it was over, I could step back and look at what I'd done."

Decker fought only once to win his title, but Gabler was a three-time champion. The lack of fighters in his weight class made for a long and stressful week as he kept preparing to fight, only to learn his bout had been postponed.

Decker also had to overcome what he and trainer Thiago Azeredo described as questionable officiating. Video of the fight is available at www.jordankickboxing.com.

"That was no easy feat," Azeredo said. "They were not going to give it to (Gabler) easy. I told him, 'You can't just beat (Gabler) on points and hope the judges get it. You have to leave the judges out of it and take it,' which he did."

Despite the penalties and a frequently halted bout, Decker forced Gabler to take several standing eight-counts.

The Dobson High School senior will take a little time off before getting ready for the national championships in February.

Decker said he learned a lot from his experiences. He took his first trip to Europe - driving on the opposite side of the road was a bit unsettling - and met interesting people.

"Coming up with the ideas and marketing them (for fundraising) was tough, but it was worth it," Decker said. "I met all kinds of different people here, and when I was (in Scotland), I met people from different countries. It was a great experience."
You can visit Jordan's blog at http://jordankickboxing.com/blog
You can listen to Jordan's father, Scott, on the Declare Your Independence Show with Ernest Hancock Sept 21st, 2010: http://www.freedomsphoenix.com/Article/075735-2010-09-21-declare-your-independence-with-ernest-hancock-afternoon-september-21st-2010.htm.
Also, on DYI with Ernest Hancock on Nov 3rd, 2010: http://www.freedomsphoenix.com/Article/078008-2010-11-03-declare-your-independence-with-ernest-hancock-afternoon-november-3rd-2010.htm

Congratulations on the win, Jordan. Yours is an amazing story of triumph over fear and the ability to excel. And the speed at which you accomplished this monumental task. Best of luck to your future.