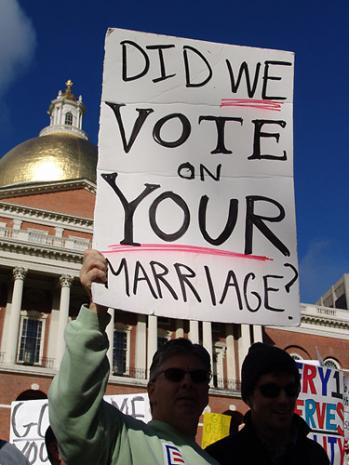 It started out as a measure to protect gay rights. Now, France's 1999 civil unions system is all the rage with straight couples, reports the New York Times. The year after the system was instituted, more than 75 percent of civil unions were between a man and a woman. By 2009, that number had jumped to 95 percent. For couples disillusioned by matrimony, the civil union presents an appealing alternative. It allows couples tax benefits, residency permits, and eschews the pomp of marriage for a hassle-free appearance before a judge. Best of all, perhaps, it can be annulled by a single registered letter. While the popularity of "getting PACSed" (pacte civil de solidarité) soars, marriage in the country is all but moribund. In some parts of Paris, the number of couples opting for PACSs already outnumbers those choosing wedding bells. Nationwide, there are two civil unions for every three marriages. Sociologist Wilfried Rault says the French are eager to get away from an institution with heavy religious overtones. "Marriage bears the traces of a religious imprint," he said. "It's really an ideological slant, saying, 'No one is going to tell me what I have to do.' "