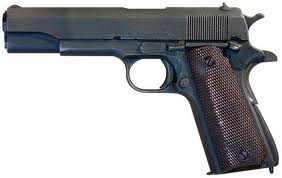 (Reuters) - Utah has become the first U.S. state to name an official firearm, placing an automatic pistol on a list of designated symbols, right along with the honeybee and the cutthroat trout.

The gun, which turns 100 years-old this year, is manufactured in Ogden, Utah.

"It does capture a portion of Utah's history," Utah State Representative Carl Wimmer, a Republican who sponsored the bill, told Reuters.

"Even bigger than that, it captures a portion of American history," Wimmer said.

Didn't Arizona already designate the Single Action Army 'Peacemaker' as its official state gun a while back?