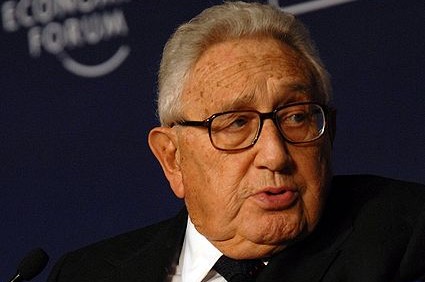 Despite the fact that the United States is embroiled in three major conflicts and can barely service its own gigantic debt, with Standard and Poor this week indicating the US will soon lose its triple-A credit rating, top globalist and former Secretary of State Henry Kissinger recently told fellow elitists at three different globalist confabs that the US needs to launch a ground invasion of Libya and keep the war running for at least another year.

According to veteran Bilderberg journalist Jim Tucker, whose sources have proven routinely accurate in leaking discussion topics shared by globalists at their regular meetings, Kissinger gave almost the exact same speech at three different conferences over the past two weeks, firstly during an April 8-10 get-together at the George Washington University’s Elliot School of International Affairs, then at an Aspen Institute session on “Values and Diplomacy” at the National Cathedral, and finally during the Bretton Woods II conference in New Hampshire.

“Kissinger, visibly depressed, gave a rationale for the war on Libya that the TC (Trilateral Commission) and its brother group, Bilderberg, want to keep rolling, according to an inside source who has proved reliable for years. Both groups want the war extended through 2012 to generate turmoil throughout the Middle East and pressure the United States into attacking Iran on behalf of Israel. Which would also produce huge war profits,” writes Tucker.

1 Comments in Response to Bilderberg Insider: Kissinger Pushing For US Ground Invasion Of Libya

We do not want or need another war.  This old fool should be put out to pasture.  The people of this Country are sick of war and our troops are stretched to the limit.

You Go First: The Peace Amendment

The Biological War Against China