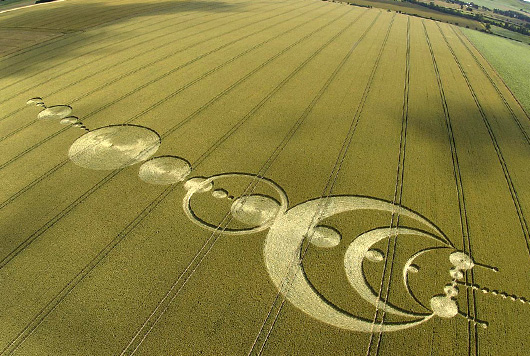 A cheery, chummy documentary about the pastoral patterns inaccurately described as crop circles, Suzanne Taylor’s “What on Earth?” musters a gaggle of enthusiasts to dish on the phenomenon.

They’re a diverse bunch — farmers and philosophers, scientists and a singer-songwriter — and Ms. Taylor, a former actress who first became involved with the group in the early 1990s, uses her familiarity to encourage them to open up. Merging homey interviews with photographs and film of the hundreds of varieties of patterns (which pop up mysteriously overnight and are found all over the world), the film makes no pretense of objectivity or analysis. Everyone on screen — most sporting little blue flowers in their lapels, like a club insignia — is convinced of an intelligence behind the designs.

What a sarcastic load of something. One need not be enthusiastic about a phenomena that carries both scientific clarity and metaphysical profundity. Crop Circles have virtually nothing to do with Euclidean geometry either. IN order to gain entry to these energy signatures, you must familiarize yourself with Cymatics or other sonic delivery systems. All that exists vibrates and the faster the vibration, the less dense the material expression to such a degree that most of the universe is beyond the physical realm with which our senses interact. One need only to look at the electromagnetic spectrum to understand this basic idea. To investigate deeper it becomes abundantly clear that physical presence is essentially virtual / holographic. Having said that, crop circles are the unique documentation of ever present energy patterns that imprint their cross sections (sound is round before it dissipates) and the places of demarcation carry an energy signature that is compatible with the subsonic frequency that creates the 'sound bubble' if you will in the first place. One essentially begets the other in a dance of mutual attraction. The value of these forms is the harmonic balancing of Earth (telluric) energies. Energy field get weak in area and even obtain holes, just like human bodies, and it is at these locations where stagnation and disease occurs. the Natural tendency for Nature to sustain balance via light, the golden mean and gravity implies that these forms are Natural rather than intentional expressions. Skeptics are people who prefer to believe that their ego controls the path of their lives. Crop Circles contradict this desire very subtly, yet offer healthful balance nonetheless. There have been over 900 reported physical healings inside of crop circle due to the intense energies.