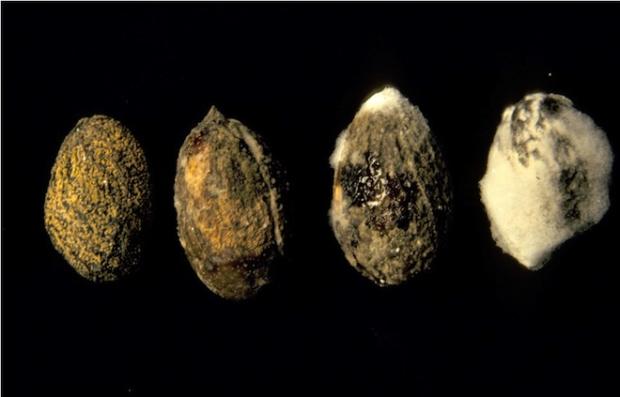 Australia’s pistachio farmers expected a bumper crop this year. Instead they had a harvest of horrors, with nuts blackened by a fungus that had never before caused an outbreak in pistachios.

The culprit was anthracnose, a fungal disease best-known for infecting mangoes. It raced through the industry, resulting in a harvest some 50 percent smaller than expected — and half of that was inedible.

What the disease means for the future of Australia’s pistachio farmers remains to be seen, but for the rest of the world it’s yet another cautionary example of fragility in modern agriculture.

“The wide cultivation of genetically uniform plant populations fosters rapid evolution among the pathogens,” said Scot Nelson, a plant pathologist at the University of Hawaii. “Because of this greed, new pathogens or newly reported host-pathogen combinations arise almost daily around the world.”

Anthracnose, usually caused by the fungus Colletotrichum gloeosporiodes, is the most important and destructive of all known mango diseases. Affected plants develop blackened lesions on flowers, leaves and fruit, the skins of which become crusty and split.

Until recently, anthracnose was considered to be mango-specific, showing no inclination to infect other members of the mango family, including cashews and pistachios. Australian researchers noted a case of anthracnose in pistachios in New South Wales in 2001. Caused by the related Colletotrichum fungus C. acutatum, it was the first reported case of its kind.

A year later, Themis Michailides, a plant pathologist at the University of California, Davis, Kearney Agricultural Center, also noticed Colletotrichum-caused anthracnose in a commercial orchard. Neither of those infections led to outbreaks, and the disease seemed consigned to background levels of disease.

However, in December 2010 and January of this year — Australia’s summertime — the country experienced torrential rainfalls unprecedented in the nation’s modern record-keeping history. Conditions were prime for an outbreak of moisture-loving pests, and anthracnose grows best in precisely those conditions.

Seemingly out of nowhere, it exploded. Farmer losses ranged from 40 to 100 percent.

Cutting out sugar: How to deal with sugar detox symptoms

Is an 'ENGINEERED FAMINE' Planned for America???