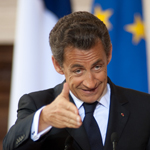 The Coup in Cote d'Ivoire ... As peace loving and progressive forces in the West and in the US in particular deliriously celebrated the awakening of pro-democratic movements in white dominated Islamic countries that routinely and officially kick blacks to the curb, growing evidence suggests the West, led by France, engineered a political and military coup in the Cote d'Ivoire, that some say is designed to re-colonize that country. Set beside widespread beliefs the West i.e., Europe and the US, is doing much the same in Libya, the Cote d'Ivoire situation needs to be looked at anew, especially in light of late reports indicate fighting has broken out among the very forces of Alissane Ouattara that overthrew and arrested the constitutionally certified president, Laurent Gbagbo. – Berkeley Daily Planet

Dominant Social Theme: Laurent Gbagbo, a strongman and a thug, deserved to be thrown out of office and Nicolas Sarkozy (left) deserves the credit for doing so.

Free-Market Analysis: We try to identify turning points in the effectiveness of power elite dominant social themes if we can. In the 20th century there were few of these because the Anglo-American control of the media was overwhelming. But in the 21st century, thanks to the Internet almost every major fear-based promotion of the elite has blow up, some of them repeatedly. Enter the Ivory Coast.

When we start coverage of an elite sub dominant social theme, we never know where it will take us. But the Ivory Coast promotion by the mainstream Western media – that justice and democracy has finally come to the King of Cocoa producers is increasingly risible. The foundering of this meme, which is part of a larger theme having to do with the soft power of modern neo-colonialism is also in our view a very big story. We've been on it and have penned several articles during the past month on this issue.

Xi, Putin Make the Case For Win-Win vs Zero-Sum