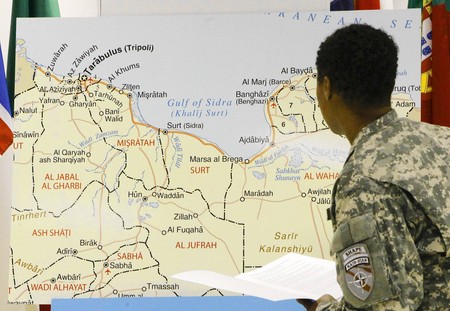 Reporting from Washington—
Frustrated at their inability to break the military deadlock in Libya and to stop the shelling of civilian areas, NATO commanders are expanding their air war by launching strikes against military command facilities and other regime buildings used by Libyan leader Moammar Kadafi and his top aides.

NATO officials said the escalation, supported by armed U.S. Predator drones, is meant to sever Kadafi's communication and supply links with army units battling the rebellion based in eastern Libya. But privately, some NATO officials say the goal is to strike directly at the pillars of the regime, including Kadafi, in the heart of Tripoli.

"This is a shift, absolutely," a senior NATO officer said Tuesday. "We're picking up attacks on these command-and-control facilities. If he happens to be in one of those buildings, all the better."

U.S. and other NATO officials, however, denied that the stepped-up campaign, which included strikes this week on a state TV facility and on one of Kadafi's residential compounds, both in Tripoli, was aimed at killing Kadafi.

NATO Will Not Leave Afghanistan 'Before Time Is Right'

Defend America, Not Ukraine: Treat Kiev as a Friend Rather Than an Ally

NATO Moves Towards War With Itself In The Mediterranean

How NATO-Member Turkey Reverted Back To Being An Islamic Dictatorship