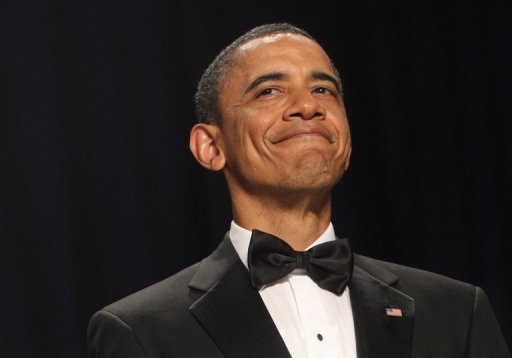 US President Barack Obama lampooned the controversy over his birthplace, playing a clip from the Disney movie "The Lion King" to mock those who claim he was not American born.

"My fellow Americans... " Obama, who was born is the US state of Hawaii from a US mother, said at a dinner of White House correspondents.

"Call Disney if you don't believe me," he said, in a reference to conservative conspiracy theories that Obama is not a "natural born" US citizen, a constitutional requirement for presidential eligibility.

"Now I know that he has taken some flak lately, but no one is happier, no one is prouder to put this matter to rest than Donald," Obama said of Trump.

The president jokingly advised Trump to "get back to focusing on the issues that matter like 'Did we fake the Moon landing?' 'What really happened at Roswell?" and 'Where are Biggie and Tupac?'"

The Roswell incident occurred in 1947 when an strange flying object that crashed in the general vicinity of Roswell, New Mexico. The military, which quickly cordoned off the site of the crash, said it was an experimental weather balloon, while others insist to this day it was an extra-terrestrial spacecraft with alien occupants.

Sighhhhh .... Google: Hawaii Revised Statutes. 338-17.8 and then Google Obama Kenyan Birth Certificate compared to Hawaii birth certificate. The United States of America was not always a budding stasi/fasist control state as it so appears to be now. I actually have or did have a birth certificate from Hawaii (in a storage box somewhere or lost).... my dad was stationed there in 1945 until 1946/47 .... problem is, my dad was born in Canada in 1898 and was a Canadian military attaché in the Hawaiian Territory with diplomatic status (he never took out or intended to take out US citizenship or had or needed a "green" card or was he any kind of immigrant or migrant in or to the US) and he was always 100% Canadian, as was my mother (born in Canada in 1913) and as I was born in Canada in 1947 (where mother returned to so my citizeship would never be questioned). When I travelled in the US in the 60's, I took out a Hawaii birth certificate based on the 1949 Hawaii statute that allowed me to do so simpily because my father was a "resident" (proof of United States citizenship was not then a requirement when I applied for a birth certificate in 1966 - either mine or dad's - only father's proof of residency was required) in Hawaii for over a year and I could supply his address and even phone number in Hawaii to the registar of births (and which statue was revised again in 1982 as .... Hawaii Revised Statutes. 338-17.8 .... which RSH only added the word "state" in the revised text of the statute) because it make my life easier travelling in the US and crossing the borders .... my so-called "birth certificate" from Hawaii was a convenience for me at the time and a family joke for many years afterwards. Just as may well be Mr. Obama's. The checks and balances recent American paranoia has produced respecting the sanctity of birth documents (identity thief, etc,) did not exist 45 years ago! Under that law, which was intended to minimize and marginalize the political power of the original ethnic Hawaiians by the American occupiers: i.e. birth certificate = right to vote (surprised that Americans would use such dirty tricks against an indigenous population?) Hahahahahaha UNDER HAWAIIAN LAW IT DOES NOT MATTER WHERE OBAMO WAS BORN FOR HIM TO GET A HAWAIIAN BIRTH CERTIFICATE - ONLY THAT HIS PARENTS OR GRANDPARENTS COULD PROVE THEY LIVED IN HAWAII FOR ONE YEAR! Got it? Obama was entitled to a Hawaiian birth certificate (reguardless of where he was born) in any event because his mother and grandparents lived there for a considerable time and the PDF 'adjustments" became necessary because certain things on the Certificate had to be "adjusted" to remove the fact that the original certificate issued to his mother or grandparents would have had his actual bithplace recorded on it. I guess I could have been an American president too ... Please call me when the job becomes open LOL