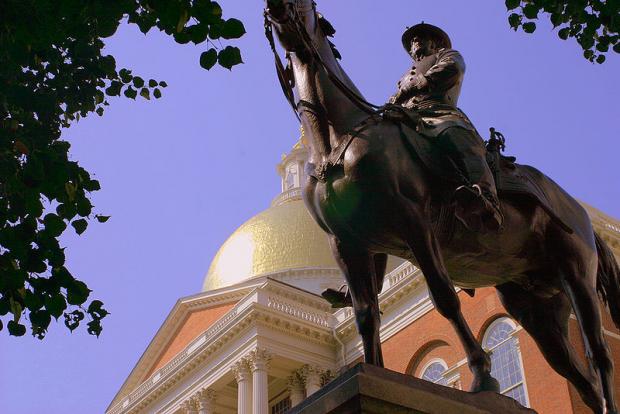 The Massachusetts legislature is conducting hearings Wednesday on a bill that would bar divorcing couples with children from carrying on a sexual relationship while in their own home.

The bill would prevent parents from "conducting a dating or sexual relationship within the home" until the divorce is final.

Although seemingly written to spare children the pain of seeing their parents become involved with other people, the bill's language is so broad it can easily be interpreted as forbidding sex entirely.

Parents that wish to have sex would need to get a judge's approval.

4 Comments in Response to Mass. bill would require divorcing parents to obtain judge’s approval for sex

Wow … how freedom lovers [freedom hackers in reverse] had gotten so mad and wild and out of control. Sample this vitriolic rant that has gone wild [!]:

"This govt controls what we eat, what we drink, what we

drive, what we can light our homes with, where and when

we can build, who we have to do business with, what we

can say...and now who we can have sex with?  I thought

Democrats wanted government OUT of the bedroom!

Hypocrites. After all these daily violations of our Constitution,

the people have more freedom and liberty in China than we

do here in the USSA."

First of all it is just a "bill" not a law, but to those already harsh comments below, as if the sky has fallen. The Court NEEDS to determine whether or not to allow a promiscuous mother WHILE IN THE PROCESS OF DIVORCE FILED IN COURT, to have sex in the home, in the presence of the children [minor children] who are experiencing the trauma of divorce. It is the mother’s libido vs. the children’s agony of witnessing their sexually active mother having sex with a man other than their father. Studies showed that this is one of the causes of severe trauma young children suffer, especially children more closely attached to their father than to their mother.

The rowdy reactions we read here -- reactions to this court intervention to protect young children from their mother’s sexual compulsion who because of her libido that could not be controlled the mother becomes indifferent to and unmindful of how the children feel -- are as wild as the mother’s promiscuity or voracious appetite for sex itself. Hotheaded dissenters are wildly interpreting this protective measure as a violation of a person’s right to sex. This protective measure is extremely necessary because of the spate of juvenile delinquencies that is rapidly rising across the country coming from growing young children with inconsiderate parents in millions of broken homes destroyed by divorce.

How can this be so politicized by the narrow-minded as an evil-doing of the Government or a transgression of freedom and liberty worse than what’s happening in China, is really, really beyond me. Clearly, there is hardly any doubt anymore that those who voice their opinion against it, have a different agenda.

The firebrand that explodes against this proposed law is so distorted that I doubt if we could ever have an intelligent discussion -- in this website of freedom -- of critical issues so important as saving our young children from being destroyed by the toxic effects of divorce. Bakadude

It is not a violation of the Constitution.  It is a violation of our persons and properties.  The Constitution is about government power.  It is loosely worded enough to give the government wiggle room, by which it expands its power.  The Bill of Rights is imprecise enought for those rights, especially that pesky right to keep and bear arms, to be called into question. The BOR was all marketing spin designed to silence opposition to the Constitution, and gain enough support for ratification.

I recommend that everyone read and consider "No Treason: The Constitution of No Authority" written by Lysander Spooner in the late nineteenth century.  You can find it online and there is even an audio version available at mises.org, all free of charge.

This govt controls what we eat, what we drink, what we drive, what we can light our homes with, where and when we can build, who we have to do business with, what we can say...and now who we can have sex with?  I thought Democrats wanted government OUT of the bedroom!  Hypocrites.

After all these daily violations of our Constitution, the people have more freedom and liberty in China than we do here in the USSA.

Vote out ALL Democrats in 2012 (or oust them sooner)

You no longer have to guess which state Brave New World comes to first. The peoples republic of Taxichusits