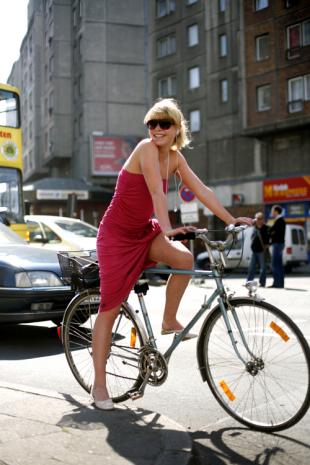 A Dutch tourist was stopped by a police officer in downtown New York City for showing too much skin, the New York Daily News reported.

Jasmijn Rijcken, 31, was pulled over on her bike and told she was a dangerous distraction to drivers because she was bicycling while wearing a short skirt.

"I didn't even think for one second that my outfit could be harmful or disturbing," she said, but she went back to her hotel and changed into pants anyway.

NYPD Deputy Commissioner Paul Browne said that the NYPD couldn't comment on the case, since Rijcken wasn't ticketed, and therefore official paperwork does not exist.

"Whether this story bears even a modest semblance of what actually occurred is impossible to establish without being provided the purported officer's name and getting his side of the story," he said.

There is no New York law against cycling in a skirt, but Rijcken was intimidated, and didn't know that at the time.

“If you’re by yourself in a different country and a police guy comes really angrily at you, you get scared,” she told Streetsblog.

Exercising ones God given rights should never be infringed upon because it upsets someone. i.e. Open carrying a firearm as we have recently seen in Wisconsin.

In NY it is my understanding that it is legal for a woman to go topless which makes this altercation absurd.

We need mechanisms to prosecute "officers"  that violate our rights.

While I like the pic you used, here is the actual photo:

More than 70 US Capitol cops have quit since January 6 riots and deadly April attack...