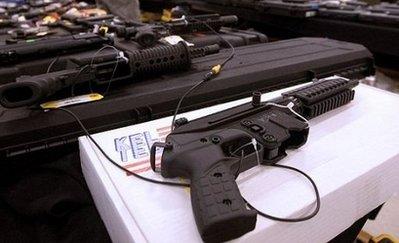 Weapons smuggled into Mexico as part of a US sting operation -- and then lost -- have been linked to numerous killings, including that of an American federal agent, a congressional report disclosed Wednesday.

The report found that the Bureau of Alcohol Tobacco and Firearms (ATF) lost track of the weapons after allowing them to be smuggled into Mexico under an operation called "Fast and Furious."

"This hapless plan allowed the guns in question to disappear out of the agency's view," said the report by Representative Darrel Issa and Senator Charles Grassley, both Republicans.

"As a result, this chain of events inevitably placed guns in the hands of violent criminals. ATF would only see these guns again after they turned up at a crime scene. Many of these recoveries involved loss of life," it said.

Two of the weapons were found at the scene of the killing of Brian Terry, a border patrol agent who was shot and killed in Arizona December 14 while trying to apprehend armed men preying on illegal immigrants.

Terry's family attended the hearing at which the report was made public.

1 Comments in Response to Weapons smuggled in U.S. sting linked to deaths: report

The guns came from regular gun shops. The shop owners contacted ATF about the questionable sales. ATF, in their infinite wisdom, told them to make the sales. Then when trying to follow the guns, the ATF lost them. They are turning up at crime scenes on both sides of the border. This goes at least as high as Holder. He's in charge of the justice dept. and even if he didn't know the details, he at least knew it was going on. The program that Bush started, that spawned this one, no guns were allowed to disappear.

The 70% figure is the number of guns SUBMITTED for trace. Which is only a small portion of the guns actually seized. This number is being touted by Holder and company because he stated early on that he wanted to re-instate the AWB. If he can get the numbers high enough, even if they have to lie, they can try to get a new and improved AWB. Of course the fact that CBP agent Brian Terry and ATF agent Jamie Zapata died is no big deal. Not including the thousands of Mexican citizens that have died. Collateral damage as it were. Why should we care about several thousand dead Mexicans. It just helps the cause.

Melson, the temporary head of ATF knew what was going on. I'm sure he kept his buddy Holder informed. They need to be sharing a prison cell. The only question will be who gets top.