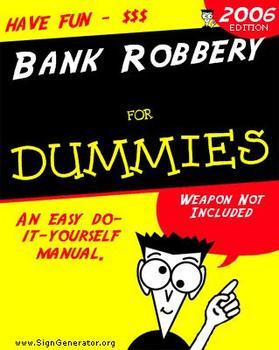 Often, crimes are borne of desperation. However, most robberies aren't motivated by a desperate need for health care.

James Richard Verone, of Georgia, attempted to steal one dollar from a bank so that he would be arrested, taken to jail and — most importantly — provided with health care, the Gaston Gazette reported.

Verone worked for Coca-Cola for 17 years, but lost that job three years ago. Now 59 years old, Verone can't handle the physical demands of the part-time jobs, like working in a convenience store, that he has successfully been hired for. Hence, he has no health care.

“The pain was beyond the tolerance that I could accept,” he told the Gazette. “I kind of hit a brick wall with everything.”

He had no criminal record prior to the planned robbery June 9, either. On that day, he walked into a bank, handed the teller a note demanding a dollar, then sat and waited calmly for the police to arrive and arrest him.

This mans problems could be rectified by proper nutrition but the USDA storm troopers will shut down anyone that says so and threatens the pharmacological monopoly.  A free market in the land of the free  is what is needed.

'We made a big mistake' -- COVID vaccine spike protein travels from injection site...

Immunologists Say the MRNA Vaccine is a 'Big Mistake'...

US Covid-Related Incentivized Payments to Doctors and Hospitals

Forget coronavirus, homoeopathy can't cure anything. It's a placebo, at best

'Ignore The CDC': Johns Hopkins Professor Says Half Of Americans Have 'Natural Immunity&

If You've Had Covid, Please Don't Get Vaccinated

This Dentist Is Stopping Mandatory Masking, Is This The Right Notice To Post?