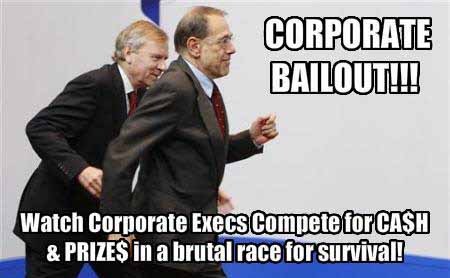 Russia Today’s liberal talk show host Thom Hartmann explained the history of how the legal theory of corporate personhood came to exist, and why you should care. “This is what we need to return to: re-regulate the corporations and say, ‘Sorry, you are not people, corporations. You do not have First Amendment rights of free speech. Get out of our political lives and our political world.’

4 Comments in Response to What is ‘corporate personhood’ and why does it matter?

I, and some of my friends, have been on about this for decades. Where the hell has everybody else been?

Just who does anyone believe will make corporations responsible to the law(s)? This is one of the greatest long cons in history! There is nobody with the integrity and b---- to make such a thing happen. We were screwed and virginity is a one-time deal.

Thanks, Bakadude. I humble myself by bowing before you! JV

"Bakadude, I am glad to know that you are a lawyer. So am I, aside from what I am teaching as Professor of Economics. Thank you for this enlightening discussion. I hope we can have more of this kind in the days ahead. JV"

JV, I apologize for not responding right away to this comment you addressed to me on the subject of corporations as persons. See Ron Paul Is There But Not To Win The GOP Nomination

First of all, thank you for looking forward to having an "enlightening discussion" from here onward.

Actually, I am always looking for brains like yours, to engage with, on issues that are critically important to the public. But that’s like looking for a needle in a haystack. What’s aplenty is a pile of vicious two-legged hay whose mouth is drooling with poison that attacks like zombies.

I don’t believe that Ernest Hancock, owner-publisher of this website, created FP.com’s Freedom Forum as a sanctuary for those whose neurosis needs to be cured by letting out their poisonous anger, frustration and depression in the air otherwise this good old publisher would have recommended or provided a link direct to certain medical websites where they can look for a cure. I think that like you and I, this website is looking for people like you who can provide brain not brawn in every discussion that is so important to the American public. And I must tell you that you’re that "find" … and to the rest like me, a gem to behold, as we sit in our rocking chair by the fireplace and mend our sore.

Don’t peddle around your ignorance that Corporations are not persons.

Take what this Video shows, with a grain of salt. The Wisconsin Law that the Video cited, is a dead law.

But first, I want to restate this response to JV when he asked me if "Ron Paul is a fan of yours?." I said, "No, JV … RP is not a fan of mine – it’s the other way around, if only …" See this headline Ron Paul Is There But Not To Win The GOP Nomination where I clearly informed the public what it should know about Corporations as persons.

The relationship of the Corporation created by law, and the people running it, i.e. Board of Directors, is defined by law. For all intent and purposes, our corporation laws [re, out of the U.S. Supreme Court’s judicial dictum] see to it that a corporation is given the identity, the right and responsibility of a person, and under the law, conducts its business operations as such. It is in this context or manner how the corporation is viewed "as people as well", in Romney’s words. Unfortunately, that ignorant heckler in Iowa does not know that.

If as clandestinely shown in this political taken Video, some angry corporate detractors -- like that young ignorant heckler in Iowa -- want to REDO the timeless dictum [ruling] of the U.S. Supreme Court that corporations are persons, which by the way since time immemorial has become the judicial law of the land, then they have to go to Congress and request their Tongressmen to pass a law declaring that henceforth corporations are no longer persons. Give any reason why it is necessary to pass this exit or terminating non-person law – any reason at all you can cook up on top of the hood of your car under the blistering heat of the summer sun, and I don’t care.

If by pure accident Congress will pass that new law, well and good and I would definitely thank that innocent young man in Iowa because he butted-in in that straw poll gathering and heckled his ignorance to Romney. I said but only by accident that that law will pass because although politicians in Congress are technically insane when their passion for shenanigan-ism takes over, they will always protect their corporate interest like those sons-of-a-gun would protect their Bonnie & Clyde Dad & Mom in the family. Think of Republicans now in control of the House, and soon of the Senate. In this country, Corporations and Republicans are just but one big family. Passing that law is like swimming the icy English Channel in winter naked and hoping to survive. Like always, my youngest grandson's favorite question to me is "Are you kidding me, GrandPa?" And this time my answer is No, Little One -- you may live with glory when you try your best, but you won't survive this kind of stupidity.

We have to wait until Congress passed this non-person law. But until then, please don’t peddle around your ignorance that -- to quote Romney -- Corporations are not also persons. At this time any reason you could think of that corporations are not persons, is totally useless …irritatingly irrelevant if not brazenly impertinent!