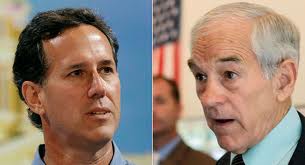 Former Senator Rick Santorum used to be known as a pro-life leader, and I think he earned it. But he backed Arlen Specter's reelection in 2004, and Pennsylvania pro-lifers bailed on him in 2006, when he lost by twenty percent. Ever since, he has been searching for the meaning of life — in politics, naturally: like so many Capitol Hill losers, he won't go home and live in the real world.

So Santorum wants to run for president. His ego outruns his skill set, however: when he came in fourth in Iowa, he fancied himself the chosen David, fighting against Goliath.

And who's Goliath? The pro-abortion lobby, Santorum's target in the old days? No, this year Goliath is apparently Ron Paul. And the Spectator, where Don Rumsfeld is king of the hill, can't stand Ron Paul. So they are siccing this two-time loser, whom Paul beat three-to-one in Iowa, on Dr. Paul, even though he strongly advocates overturning Roe v. Wade. The GOP establishment doesn't care about abortion — of course. No, they want more war, and Santorum, having nothing to lose (since he's lost it already) is their chosen hatchet man — not to defend life, but to attack the OB/GYN who has delivered 4,000 babies.

Pro-lifers (unloved by many libertarians, to be sure) have been betrayed again and again and again — for almost forty years, in fact — by GOP trough-dwellers who need their votes, but hate their cause. Santorum caved to the Hot Tub's siren song in 2004, and paid the price, big-time. But as my father used to tell his law students, "If you take the first bribe, you might as well take the rest."

"Keep your eye on Rick Santorum," writes the Spectator's resident Paul-basher Jeffrey Lord. Yes, watch closely, to see if this one-time pro-life hero switches sides and yields to the siren song of war.