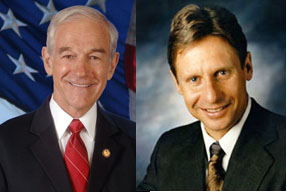 (Publisher: Prediction.... Gary Johnson pulls from other candidates much more than from Ron Paul in online polling {Blah Blah Blah polling by the news outlets are whatever they say it is}. Gary's participation won't have hardly any impact on Ron's numbers in my opinion but will demonstrate a much wider shift in our cultural base... It's all Goooood :)

The Republican presidential field may be headed toward a two-man race between Rick Perry and Mitt Romney, but don’t tell that to Gary Johnson, the former governor of New Mexico.

Mr. Johnson is also a candidate for the White House, but he’s dropped off the national radar since being excluded from several televised debates.

But his standing in several national polls has finally cracked 1 percent, the standard by which Fox News Channel has decided to include presidential hopefuls in Thursday night’s contest in Orlando, Fla.

And so Mr. Johnson, a libertarian who favors the legalization of marijuana and is against the wars in Iraq and Afghanistan, will stand on the stage with the other eight Republican candidates. A spokeswoman for Fox News confirmed the decision Tuesday evening.

That could be good for ratings: in his only other debate appearance of the 2012 campaign last May, Mr. Johnson spiced things up a bit, saying that troops should come out of Iraq “tomorrow,” and received boos by pronouncing himself “pro choice” on abortion.

It will, however, add to the competition for airtime during Thursday night’s debate as the moderators balance the desire to focus on the leading contenders — Mr. Perry and Mr. Romney — with the desire to give everyone a turn.

========
ABC Reporting Gary Johnson to Participate in National GOP Debate
Over the objections of the Florida Republican party, the former New Mexico governor is invited to participate in Fox’s GOP presidential debate this Thursday, a source at Fox News confirmed.

horrible article is horrible (NYTs). The article, and comments, are pathetic and forgets to state he is the second Libertarian in the race.