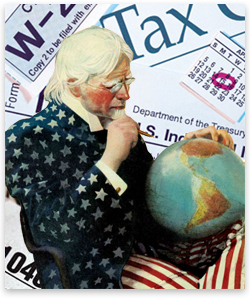 When Julie Veilleux discovered she was American, she went to the nearest US embassy to renounce her citizenship. Having lived in Canada since she was a young child, the 48-year-old had no idea she carried the burden of dual citizenship. But the renunciation will not clear away the past ten years of penalties with the Internal Revenue Service (IRS).[1]

Born to American parents living in Canada, Kerry Knoll's two teenaged daughters had no clue they became dual citizens at birth. (An American parent confers such status on Canadian-born children.[2] ) Now the IRS wants to grab at money they earned in Canada from summer jobs; the girls had hoped to use their RESPs (registered education savings plans) for college.[3]

The IRS is making a worldwide push to squeeze money from Americans living abroad and from anyone who holds dual citizenship, whether they know it or not. It doesn't matter if the "duals" want US status, have never set foot on US soil, or never conducted business with an American. It doesn't matter if those targeted owe a single cent to the IRS. Unlike almost every other nation in the world, the United States requires citizens living abroad to file tax forms on the money they do not owe as well as to report foreign bank accounts or holdings such as stocks or RSSPs. The possible penalty for not reporting is $10,000 per "disclosed asset" per year.

Thus, Americans and dual citizens living in Canada (or elsewhere) who do not disclose their local checking account — now labeled by the IRS as "an illegal offshore account" — are liable for fines that stretch back ten years and might amount to $100,000. A family, like the Knolls, in which there are two American parents and two dual-citizen children, might be collectively liable for $400,000.

Approximately 7 million Americans live abroad. According to the IRS, they received upwards of 400,000 tax returns from expatriates last year — a compliance rate of approximately 6 percent. Presumably the compliance of dual-citizen children is far lower. Customs and Immigration is now sharing information with the IRS and, should any of 94 percent expats or their accidentally American offspring set foot on US soil, they are vulnerable to arrest.

1 Comments in Response to The Attack on Accidental Americans