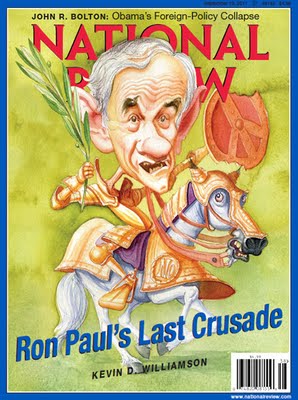 Although William F. Buckley, Jr., died more than three and a half years ago, his spirit clearly lives on in the National Review, the neoconservative political magazine he founded in 1955. The September 19 cover story, “Ron Paul’s Last Crusade,” by Kevin D. Williamson, purports to be an investigative piece about Congressman Ron Paul and his latest run for the presidency, but is instead a snide character assassination of Paul and an all-purpose smear on anyone who shares his convictions, including The John Birch Society.

“Ron Paul is kind of a dork,” Williamson declares in the article’s opening paragraph – this allegedly in favorable contrast to “Mussolinian” Barack Obama, “cowboy” Rick Perry, and “self-parodically ‘presidential’ ” Mitt Romney. Decrying the “raging personality cult” that has supposedly elevated Ron Paul far beyond what his limited natural merits could possibly justify – the congressman checks his watch too often, according to the article, and isn’t much of a public speaker, transgressions that make him America’s “most successful awful retail politician,” whatever that means – Williamson effuses paragraph after paragraph of scornful prose intended to portray Ron Paul supporters as nut jobs and ignorant wackos. Dislike the Federal Reserve? How dare they, those ignorant booboisie! Oppose interventionist American foreign policy? What are they thinking, given the shining success of America’s incessant warmaking in the Middle East and Central Asia over the past generation!

Now even what I now call Phony Fox News is exposed as they try to down play & marginalize the current best hope for America. Don't forget that Ron has been elected for 30 years from a heavily Hispanic district. He has won or come close to winning many polls & debates. Here is why I now rail on Phony Fox News:


Hi every one at The Five. This is information I am posting all around on the net. Needless to say, I am very disappointed in your propagandist portrayal of Ron Paul. You can dismiss me a crazy RP supporter if you want. I just post this, let the people decide.

Fox is biased. But they are very sneaky about it. Like how most of the vapid talking heads keep saying Ron Paul is unelectable. Jive like that.

Is media ignoring Ron Paul? While Fox is not quite ignoring Ron, IMO they wish they could, many of their talking mouths marginalize , take cheap shots at & downplay him. The following link is about all media, not just Phony Fox:

The other day on Happening Now, one of the Phony Fox shows, Eric Bolling, Greg Gutfeld, Juan Williams & a coupla other ding bat ladies were snarking over 'Crazy Uncle' Ron Paul like something was wrong with him. Many at Fox repeat the jive mantra about him being unelectable, isolationist & often something along the lines of the 'Fed' isn't so bad in response to Ron's audit the 'Fed' bill. .

Isolationist?? Ron Paul? Hardly. Not even. No way. If RP is isolationist he is in good company with the US Founders. Ron says the same things they did regarding foreign policy. Trade, travel, friendly relations with all countries possible, entangling alliances with none. How does wanting to end the printing $ based on the thin air inflation machine, AKA the 'Federal' Reserve, or at least have an audit of their secret books, make one weird? Or 'out there'???

How does calling for an end to undeclared war, like the one in Libya, bringing our troops home, stop policing ME countries borders & stop spending US $ building roads, bridges & so on when we are up to our nose in debt, equate to isolationist? These clowns on The Five are not the only ones. Spin master Bill O'R, Hannity, indeed, most of the Fox spouting heads, disparage Ron in sneaky little ways, though Fox  has him on, IMO so they can boost their ratings.

Now I find that another Fox lady I used to like, SE Cupp, is saying Ron Paul is "out there" & Ron  would be an albatross around the neck of the R half of the Big Govt Party, the D's being the other half. As I was looking for media bias against Ron Paul I was again surprised to find another Fox 'heartbreak', Laura Ingraham, who seems to be a sneaky, subtle slyly understating negative remark making CINO NEOCON shill when it comes to Ron Paul.

In the interview @ the above link Laura interrupts Ron Paul quite often, vainly trying to trip up the good doctor.  She gets her lunch eaten.

The only shows left on Fox now that are worth watching are Lou Dobbs, Stossel, Freedom Watch with Da Judge & Cavuto. I WAS a big fan of Follow the Money,  but when bottom line push comes to saving the country, Eric Bolling exposed himself as a CINO.

On Freedom Watch, Da Judge exposed the bias against Ron Paul by others at Phony Fox News & some other 'news' outlets. Da Judge played this clip:

Note Chris Wallace, who moderated the Fox debate & what he says. And does NOT say.

I am a TEA conservative independent. I used to have hope for Fox News. Now I wonder how long Dobbs,  Stossel, Cavuto, & Judge Napolitano will survive because they still push for Constitutional liberty & have Ron Paul on their shows as often as possible. Plus they don't disparage Ron, they give him the cred he richly deserves by just letting Ron speak. Not a good thing at Fox these days...

Looks like Fox News' true Conservative In Name Only network colors are shining forth.

NYT-Style Prostitution of the Press

Interview 1645 – James Corbett on The Delingpod

Patrick McEnroe and Billie Jean King tell Naomi Osaka, 23, it's part of her job to speak...

I'm a Doctor, But Covid's Broken My Faith in Medical Research

CNN in free fall since Trump left the White House