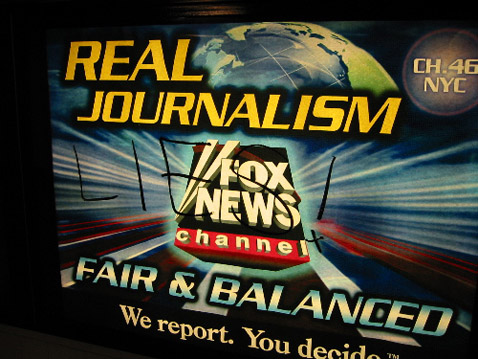 The establishment media’s relentless campaign to denigrate Congressman Ron Paul’s presidential campaign has manifested itself once again, after a poll showing Paul had won last night’s Orlando debate was pulled by Fox News who later published an article claiming Mitt Romney had instead claimed the victory.

When we took a screenshot of the poll at around 5am CST this morning, the result showed Paul easily beating his nearest rival Romney by 11,000 clear votes, with Paul at almost 40% and Romney trailing at just under 23%.

After our screenshot of the poll was posted on the ever-popular Drudge Report website, Fox News pulled the page that had previously housed the poll entirely. But the network went further, subsequently publishing an article by National Review editor and Fox News contributor Rich Lowry opining that Mitt Romney had in fact won the debate, thereby completely ignoring their own website poll, which restricts users to one vote per IP address.

Something positive out of a "Gadfly" candidate for president?

I watch this section of freedomsphoenic.com everyday because I find Bakadude quite an intellectual character to read. I can write as fast and can think as much as Bakadude can, this I assure you, but I do not say this in the spirit of competition but only for purposes of comparison of how almost parallel minds agree and at the same time differ in tackling important issues in an online public debate.

I slightly differ with Bakadude and to the general view of the public that Ron Paul is a "Gadfly" when both take the position that Ron Paul has no reason to be in the panel of GOP presidential candidates debating on national television. I noticed that this assessment of Ron Paul’s questionable candidacy for president might prove that there is something positive out of this candidate’s irrelevance in the GOP.

In spite of being described as a "nuisance" or a "Gadfly", which is hard to deny that Ron Paul really is, the Republican Party wants to present to the American public the "best" and the "worst" candidates to select from. The Republicans would probably justify this "oddity" – would rationalize the presence of their "worst" candidate in the line-up -- by saying that they are not like the Democrats that can only present to the public the worst candidates led by Obama for the public to choose from.

This implies that the Republicans can present real alternative candidates for the American people to select from re, the "worst" and the "best" the could choose – the Democrats … Zero.

It is Zero for the Democrats because you think the Republicans will admit that the Democrats are capable of presenting other alternative Liberal candidates less worse than Obama? That would be a trip to Disneyland where in the mind of the Republican leadership the wonder world is too good to be real.

No use to bring up this vote "irregularity" all the time. Ron Paul CAN NEVER be a GOP candidate for president. Let’s accept this sad reality. This should have sunk in deep enough inside the cerebral cubicle of political backers long time ago.

In the debate, a "Gadfly" [an unkind remark that describes Ron Paul in the GOP debate] has actually NO OFFICIAL VOTE on record, although his name appears, and no matter how, in reality, he sweeps the straw polls.

The Media simply IGNORES Ron Paul because in public, he is seen by millions of Americans across the country as an "unelectable" candidate! Blaming the Media is a twisted way of looking at this tragic happening. To elect a president, the Media will only cover what the public wants … not what the public rejects.

If at all, to be blamed are those millions of American people who think Ron Paul is a "nuisance" in the GOP’s "selection" of standard bearer for the coming 2012. But the truth of the matter is, the American people couldn’t be blamed either – only Ron Paul and his supporters have nobody to blame but themselves.

And why are they to blame themselves and no one else? Or to put it in another way, and why Ron Paul has only to blame himself for clearly becoming "unelectable" in the eyes of millions of Americans across the country? I have explained, not only once or twice but so many times why. Go to this latest … "10 TWISTED REASONS NOT TO VOTE FOR RON PAUL".

It is an exercise in futility … It is not I who authored this public expose’.

Among the Texas Congressman’s "oddities" that make him "unelectable" -- just to mention a few -- is swearing publicly to his guts that when elected president he would change America to a new country WITHOUT a Central Bank [Federal Reserves], WITHOUT income tax or IRS; would introduce his street economics of "transparency" [public audit] of the financial system which is against the nation’s needed banking security system [banking is protected by law to prevent panic that would create bank runs, etc. … this dream would come true only in the economic system of this capitalist nation -- the United States of America -- perhaps when the crow turns white.

Mouthing Osama bin Laden’s jihad war declaration that 911 was the fault of the American people – not of Al Qaeda terrorists – for "meddling" [his word] in the internal affairs of the Arab world is quite an oddity, worse than when elected president he would abolish the United Nations in New York and turn America into an international RECLUSE … so that Americans could just stay at home, mind their own business, and abundantly enjoy their wealth and power domestically alone to themselves, a totally secluded America with a distorted nationalistic fervor [again this would happen only perhaps when the crow turns white]; this Libertarian jingoistic interpretation of individual liberty and freedom, i.e. [just a miniscule example], the right to drink raw milk and consume FDA-prohibited or regulated unpasteurized milk products and without FDA protection the freedom to spread a disease nationwide [i.e., a dreaded contagion such as Salmonella, Ecoli and Listeria, etc.].

Let’s NOT beat a dead horse [with a stick of self-denial] about the reality of Ron Paul’s "unelectable" candidacy for president … and what would happen if indeed it would ever happen, when he becomes president. Such dead horse beating is definitely a waste of time …the purpose of his protracted political struggle is untenable, while such tremendous waste of resources and energy for his presidential campaign which could have been otherwise directed to good use by a nation besieged with problems is undeniably unacceptable!

My concern is that supporters are going ballistic when the author of "10 Twisted Reasons …" attempted to open their eyes to reality that Ron Paul is "unelectable" aspirant for president of the United States. They call such written eye-opener "vomit" or puke.

My wonderment is centered on understanding what really makes supporters so angry when presented with the truth and nothing but the truth that Ron Paul is an "unelectable" candidate for president to that point where they become soooo …BELIGERENT and soooo UNREASONABLE! The only logical answer to that is the fact that instead of going smart, going dirty is an escape route for those whose cerebral cubicle is empty. I am sadden with the thought that for me to state this Exhibit # 1 proves what kind of supporters Paul have out of the trench.

I mean no offense to anyone … I am just stating what I see before me, the right of every citizen that owes allegiance to telling the truth unconditionally, rather than the right to deceive the public for some unexplained reason/s or in the name of a Free Press to mislead the public in pursuit of a hidden agenda.

NYT-Style Prostitution of the Press