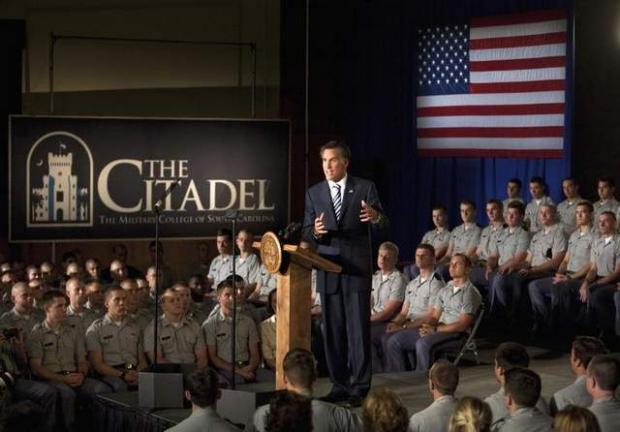 Republican Presidential candidate Mitt Romney made his first major foreign policy speech Friday at The Citadel, a military college in the important primary state of South Carolina. Full of pomp and belligerence, he called for a century of American dominance.

Romney condemned what he called an isolationist tendency from the tea party conservatives and other Republicans that dare dissent from the pro-war ideology of the party.

“This is America’s moment. We should embrace the challenge, not shrink from it, not crawl into an isolationist shell, not wave the white flag of surrender, nor give in to those who assert America’s moment has passed. That is utter nonsense,” he proclaimed.

Romney is the truest of the staus quo candidates who has been ordanied by the gate keepers of the establishment media as the leader of the Republican candidates.  Todays speech at the Citidel is more proof of his allegiance and why he gets so much media attention.  He wants to continue the leftist idea of making the world safe for democracy (an the corporations who profit from war and empire).  This dates way back to President Wilson.  Only today people like him are more dangerous and more of a cancer upon the lives of our people and our country due to the gross size of empire and the goals and actions of his and their special interest promoters.

He is not a candidate of peace and prosperity.  He is a candidate promoting and destrutive foriegn and war policy which, if it continues, will further the nations slide into the sewer.

How dare he claim empire buidling on the backs of the American people is exceptional!!  The establishment propaganda about American Exceptionalism is campaing retoric designed to giver the voters a false choice between Empire run by Republicans instead of Democrats.  Those who profit and control from beneith their rocks know that the war mongers Obama and Hilary will do their bidding just like Romney and Perry.

Actually America signifies, due to the internationalist/globalist leadership, war, economic ruin and the demise of jobs and the american way of life.  If Romney or Obama win, or their ilk, totalitarianism will flurish in what was the land of opportunity and freedom.

Democrats And Republicans Unite To Demand US Invasion Of Cuba

China Chases US Warship Out of Disputed Seas