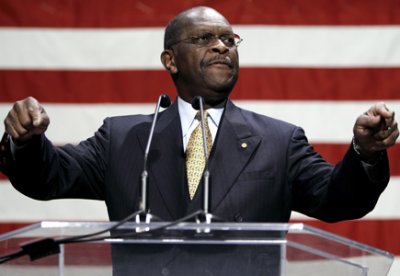 The scandals swirling around Herman Cain today — that two women accused him of sexual harassment in the '90s, and his campaign may be in violation of federal campaign and tax laws — will be fatal to his presidential ambitions. It's over folks.

There were reasons to believe that conservatives would stand behind their man — and if he comes up with a good story, they still might.

1) They liked Cain personally, and more than that they liked the idea of Herman Cain. Here was a successful-in-the-market black entrepreneur who was becoming the favorite of Tea Party Republicans. Cain's very person seemed to embody the success of a conservative ideology, and at the same time his popularity flattered conservatives. He was a walking refutation of liberal claims that conservative Republicans are racists.

2) Conservatives, whatever they said about Bill Clinton, are primed to believe that many sexual harassment lawsuits are monetary shakedowns by aggrieved employees. All that Cain's team had to do was say affirmatively that nothing inappropriate happened and imply strongly that these lawsuits were settled for financial and public-relations reasons.

3) It is getting so late in the primary season, it seems like there was no time left to get behind a conservative alternative to Mitt Romney. Texas Gov. Rick Perry has seen his support base completely erode, and Newt Gingrich, Rick Santorum, and Michele Bachmann are in no better position to replace him as the base's standard-bearer.

And conservatives did line up to defend Cain last night when the story broke. Ann Coulter and Washington Examiner lined up to compare this report to attacks on Clarence Thomas.