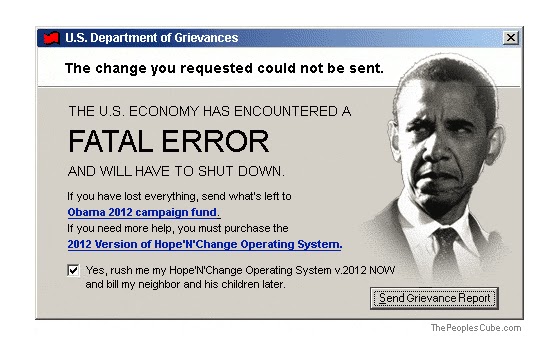 Blending governing with re-election politics, President Barack Obama roused a cheering northeast Pennsylvania crowd Wednesday as he warned of a "massive blow to the economy" if Republicans block a payroll tax extension.

But hours later, addressing donors in New York, he toned his rhetoric down and declared progress was possible.

Obama took to the road with a dual pitch for money, campaigning for more cash in the pockets of U.S. workers - and for his campaign treasury as well.

He pressed his case at a campaign-style rally in working-class Scranton, Pa., where he said Republicans had to choose between lower taxes for the wealthy, or a payroll tax cut that would help working Americans. Republicans say they would support extending the payroll tax cut, but reject new taxes to offset the costs.

Can't reduce taxes. Why not?

Reducing BG means no more excuse to borrow from the FED.

No more borrowing from the FED means no more funds to repay past loans and interest.

If the U.S. defaults on bank loans, the FED and IMF will bring in foreign troops to fight America.

Hey! Our military wants more war, right? This might just be the way to give it to them. Right here at home. And after we conquer the world in that fight, we will have it all.

Naw, we better raise taxes rather than have a real WWIII.