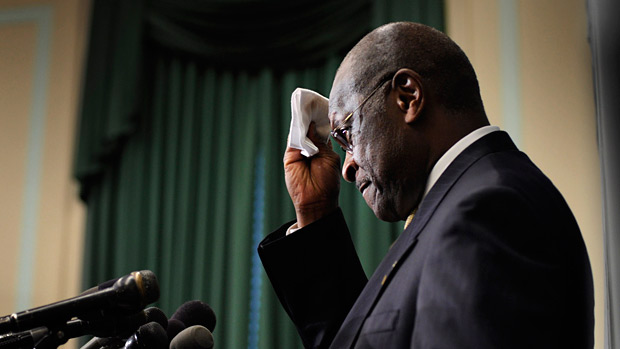 (Publisher: Blah Blah Blah, he was a Head Fed)

Herman Cain​ has spent his life living and working all over the country -- Indiana, Georgia, Minnesota, Nebraska, Kansas, Washington, D.C. -- but never in Chicago.

So it's curious that all the sexual harassment allegations against Cain emanate from Chicago: home of the Daley machine and Obama consigliere David Axelrod​.

Suspicions had already fallen on Sheila O'Grady, who is close with David Axelrod and went straight from being former Chicago mayor Richard M. Daley's chief of staff to president of the Illinois Restaurant Association (IRA), as being the person who dug up Herman Cain's personnel records from the National Restaurant Association (NRA).

The Daley-controlled IRA works hand-in-glove with the NRA. And strangely enough, Cain's short, three-year tenure at the NRA is evidently the only period in his decades-long career during which he's alleged to have been a sexual predator.

After O'Grady's name surfaced in connection with the miraculous appearance of Cain's personnel files from the NRA, she issued a Clintonesque denial of any involvement in producing them -- by vigorously denying that she knew Cain when he was at the NRA. (Duh.)

And now, after a week of conservative eye-rolling over unspecified, anonymous accusations against Cain, we've suddenly got very specific sexual assault allegations from an all-new accuser out of ... Chicago.

Herman Cain has never lived in Chicago. But you know who has? David Axelrod! And guess who lived in Axelrod's very building? Right again: Cain's latest accuser, Sharon Bialek.

1 Comments in Response to David Axelrod's Pattern of Sexual Misbehavior by Ann Coulter (Re: Herman Cain)

He sure is a generous man: