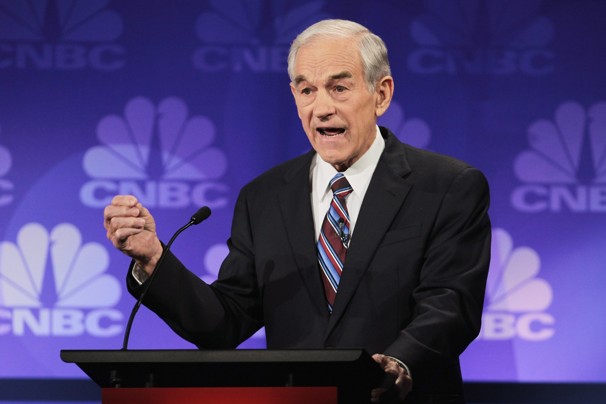 Asked on CNN’s “State of the Union” about Saturday’s Des Moines Register poll showing him surging into second place in Iowa, the Texas congressman and GOP presidential hopeful said the survey reflects that his positions on economic and foreign policy issues have been “striking a chord with the people.”

“Of course it is very encouraging because we’re getting pretty close to it being within the margin of error,” Paul said. “So, I think we continue to do what we’re doing. We’ve had the flavors of the month up and down so far in this campaign. I’d like to think of myself as the flavor of the decade.”

In the newspaper’s October poll, former Godfather’s Pizza CEO Herman Cain (R) and Romney were in a dead heat for first place with 23 and 22 percent, respectively. Paul took third with 12 percent, and Rep. Michele Bachmann (R-Minn.) placed fourth with 8 percent.

Asked by CNN’s Candy Crowley about his electability in the general election, Paul dismissed a recent survey showing that only four percent of Republican voters viewed him as the candidate best poised to defeat President Obama in November 2012.

“You know, I would say that if the people in Iowa wouldn’t consider me a good option to beat Obama I wouldn’t be a close second in there,” Paul said. “So, it is already reflecting a favorable rating for that. But I think you point out -- maybe you’re giving me subtly some good advice, ‘You better keep working.’ And that is what we have to convince the primary voters that we can do a good job in the general and that, of course, is part of the campaign.”

1 Comments in Response to Ron Paul: ‘I’d like to think of myself as the flavor of the decade’

"The publishing operation was lucrative. A tax document from June 1993—wrapping up the year in which the Political Report had published the "welfare checks" comment on the L.A. riots—reported an annual income of $940,000 for Ron Paul & Associates, listing four employees in Texas (Paul's family and Rockwell) and seven more employees around the country. If Paul didn't know who was writing his newsletters, he knew they were a crucial source of income and a successful tool for building his fundraising base for a political comeback."

Biden 'Confesses' - There Was No Insurrection!

Ron Paul Recaps Biden-Putin Summit: Why Media & Politicos Get It All Wrong