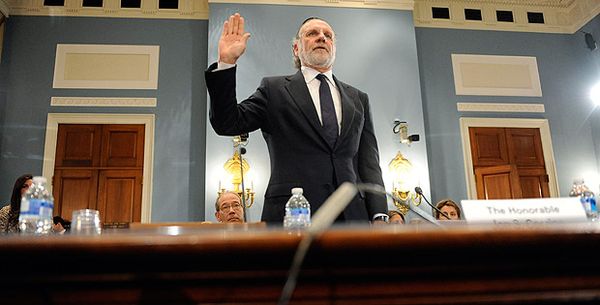 Corzine said he was “stunned” to learn that the firm could not locate hundreds of millions of dollars in client money in the days before the firm’s collapse, and said he had no idea where the money had gone.

Corzine was chief executive of MF Global when the firm filed for bankruptcy protection Oct. 31. He resigned from his post five days later.

“I simply do not know where the money is or why the accounts have not been reconciled to date,” he said in testimony before the House Agriculture Committee.

Client money should have been held in segregated accounts separate from those involving the firms’ own trading activity. The disappearance of the money has led to speculation that MF Global used customer funds to shore up risky bets on European sovereign debt.

“I never intended to break any rules,” Corzine said when asked whether he had ever authorized a transfer of customer funds from segregated accounts.

“There were an extraordinary number of transactions during MF Global’s last few days, and I do not know, for example, whether there were operational errors at MF Global or elsewhere, or whether banks and counterparties have held onto funds that should rightfully have been returned to MF Global,” Corzine said.

Stunned? I'll bet...If he didn't know - he likely did - he's stupid. Otherwise, as is more than probably the case, he knew exactly what was going on. There are damn few politicians - he is a politician - who ever admit to being traitors, thieves, or sell-outs.