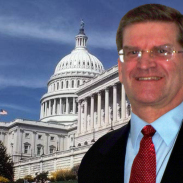 The Democrats have unveiled their keen new strategy for re-electing the most unpopular incumbent President in history; the game plan is to convince us that our American system of limited government and free markets has never worked.  It is hard to imagine how the Republicans could find a way to lose to that – but never underestimate the Party of McCain’s capacity for epic fail when victory comes knocking .

For reasons which escape logic unenhanced by chemistry, the Republicans have stonewalled Gary Johnson, ignored Ron Paul, and decapitated Herman Cain, marginalizing the three candidates who generate the most enthusiastic grass roots support in its base.  Using contrived televised debates and juiced polls, the GOP establishment has tried in vain to shape its nomination race into a Newt/Mitt battle of the insiders.  Too bad that quirky little fellow from Texas foiled their plans, and I do not mean Rick Perry.

Like most Republican standard bearers going back to the days of Richard Nixon, Mitt Romney’s chief qualification for the nomination is that it is his turn.  Newt Gingrich has risen to first among his rivals by scolding the media and remembering things.  Neither man suffers from chronic consistency or principled position.  And while either would be preferable to going over the falls with Obama, neither excites the passions of the liberty movement who rolled Washington in November of 2010.

Narrowing the field to a contest between the richest man (Romney) and the whitest man (Gingrich) makes for bad optics in a party suspected of caring only about rich white men.  But what is more problematic for my Republican friends is that neither of those two guys is the anti-Obama; that would be the afore-mentioned Ron Paul.  From where he stands on nearly every major issue, Paul must look past both Romney and Gingrich to get a glimpse of the President’s position.

I am a libertarian, so naturally I’m a Paulie; have been ever since he ran as our party’s standard bearer in 1988 against Bush the Elder.  My conservative friends like Ron Paul but get all hinkey about his libertarian views on the drug war and his aversion to real wars of the undeclared variety.  I remind them that their beef is with the Constitution, not with the cranky Texan baby doctor who stands steadfast in its defense.  And besides, he’s in pretty good company on these matters – Washington, Jefferson, Goldwater, Buckley, and Will, to name just a few.

Let’s cut to the chase: only 33% of Americans self-identify as Democrats with another 33% calling themselves Republicans.  And don’t kid yourself; none of those folks are going off the reservation unless their team springs Charles Manson from prison to head the ticket with Octo-mom as his VP.  Whoever’s name is followed by (D) or (R) respectively is getting their chad punched by the straight-party-line voters.

Which means the next President of the United States will be the one who can get the most members of the last 33% - the independents – to get up off the couch and stand in line in the rain to vote for him.  Do you think Romney can do that?  Gingrich?  When is the last time you even saw a bumper sticker for either one of them?  No seriously – those guys are not setting off an epidemic of leg tingles.

1 Comments in Response to Game On

I'm 55 years old.  I can never remember anything called a "free market" operating in the United by force States of America.   We are a Fascist Nation.  Have been since the CONstitution began to rule and the first two monopolies were created (One government to rule them all and the post office for the smartest man on the planet, Ben).  Afterwards, when CONgress went into session and for the first time started passing requirements, restrictions or competitively inhibitory regulations for the benefit of their friend's commerce.  It has been a party for your labor ever since slaves.