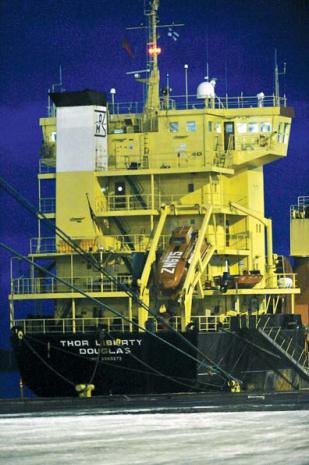 BEIJING - Finish authorities confirmed that a shipment of 69 surface-to-air Patriot missiles was destined for Republic of Korea (ROK) instead of Shanghai, as earlier reports said.

According to Finish national broadcaster YLE TV, the ship, which also carried around 160 tons of explosives, originated from Germany and was headed for the ROK. It made port in Finland to pick up a consignment of anchor chain for delivery to China.

The M/S Thor Liberty -a British-flagged cargo ship and owned by Danish firm Thorco - is registered in the Isle of Man, a self-governing territory under the British Crown.

Detective Superintendent Timo Virtanen of the Finish National Bureau of Investigation says the captain and first mate of the ship - both Ukrainians - are suspected of breaking Finnish laws that forbid the export of weapons.

Virtanen said on Thursday that "the missiles did not have the appropriate transit papers," adding that the police were questioning all the other 11 crew members, also Ukrainians.

The ship sailed from the north German port of Emden on Dec 13 and two days later docked in Kotka, southern Finland.

Containers Are Being Built At A Record Pace. It's Still Not Enough