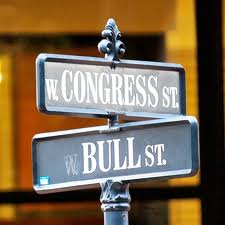 If our founding fathers could see the cesspool that the U.S. Congress has become today, they would roll over in their graves.  Most Americans don’t realize this, but we already have a “part-time Congress”.  Members of Congress only “work” a little over a third of the days on the calendar.  The rest of the time they have off.  It is no wonder why so many members of Congress are involved in so much corruption – they have so much free time on their hands that they are bound to get into trouble.  Many members of Congress also use their positions of power and the information they learn during the course of their duties to become fabulously wealthy.  At a time when incomes nationally are actually declining, our Congress critters are becoming stinking rich at a staggering pace.  Yes, politics in America has always been a game that is funded and played by wealthy individuals, but things have gotten so extreme that it is hard to argue that average Americans have any control over Congress at all at this point.  Instead of a government “of the people, by the people and for the people”, we now have a government “of the wealthy, by the wealthy, and for the wealthy”.  If you doubt this, just keep on reading.

Over the past couple of decades, the “wealth gap” between members of Congress and average Americans has grown to ridiculous proportions.  Things have gotten so bad that now even the New York Times is reporting on these things….

“Largely insulated from the country’s economic downturn since 2008, members of Congress — many of them among the “1 percenters” denounced by Occupy Wall Street protesters — have gotten much richer even as most of the country has become much poorer in the last six years”

So how wealthy have members of Congress become?

-Today, there are 250 members of Congress that are millionaires.

2 Comments in Response to You Won’t Believe How Corrupt, Lazy And Stinking Rich Our Congress Critters Have Become

Why do u think it is called CONgress? Most if not all should be arrested and tried for conspiracy to commit treason. "As long as we have politicians, there will always be suffering, misery, death and wars."

“A nation can survive its fools, and even the ambitious. But it cannot survive treason from within. An enemy at the gates is less formidable, for he is known and carries his banner openly. But the traitor moves amongst those within the gate freely, his sly whispers rustling through all the alleys, heard in the very halls of government itself. For the traitor appears not a traitor; he speaks in accents familiar to his victims, and he wears their face and their arguments, he appeals to the baseness that lies deep in the hearts of all men. He rots the soul of a nation, he works secretly and unknown in the night to undermine the pillars of the city, he infects the body politic so that it can no longer resist. A murderer is less to fear. The traitor is the plague.”
Marcus Tullius Cicero