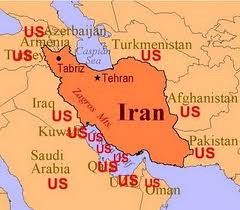 In many ways, America’s and Israel’s much-anticipated war against Iran has already begun. It is not the type of war that was expected — an Israeli textbook style surprise and swift attack on Iranian nuclear facilities, followed by a sustained U.S. and NATO air campaign — but a covert war with quite an unexpected feature. The covert war, which has seen increased U.S. drone activity over Iranian skies and an increase in suspicious explosions at Iranian military facilities, has been coupled with American support for destabilization efforts against all of Iran’s allies and friends, including Syria, Russia, China, North Korea, and Venezuela…

This multi-pronged attack strategy has sent a clear message to Iran, it is not safe from covert sabotage at home and it cannot look to its friends abroad for help as they deal with their own U.S. and Israeli-inspired domestic strife.

Although Libya under Muammar Qaddafi was no friend of Iran, the coming to power of pro-Saudi Wahhabi Salafist-Sunni elements in Tripoli and Benghazi increases the phalanx of Arab states actively opposing the Shi’a government in Tehran. The success of the Muslim Brotherhood and Salafist parties in Egypt’s parliamentary election also spells problems for Iran.

However, it is the potential loss of power by the Bashar al Assad regime in Syria that poses the worst immediate defeat for Iran. Syria has been Iran’s closest ally in the Arab world. The West and the Saudis and Qataris have been supporting Salafist elements, including terrorists, who have committed their own share of atrocities in Syria, much as the same ilk conducted massacres of pro-Qaddafi, as well as black African guest workers and black Libyans, during the Libyan civil war.