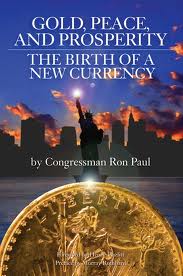 Ron Paul published Gold, Peace, and Prosperity in 1981. What makes his pamphlet especially attractive today is the speed with which it can be consumed. A reader could get through his robust prose during an hour lunch break.

But why would a reader want to do that? Why not read one of Paul’s more recent books instead, even if it couldn’t be read in one sitting?

The answer is, the earlier work provides an excellent foundation for his later writings. It offers a clear, non-technical summary of his views on money and the economy.

Ron Paul has made his mark as an advocate of sound money. As such, he is totally opposed to fiat money and its imposition through the government-supported cartel, the Federal Reserve. It is largely through a hijacked monetary system that government has become a threat to civilization. In this pamphlet, Paul puts it all in perspective with everyday language, as if he’s talking to you – over lunch.

Sound money, he says, is money that is “fully redeemable.” The paper currency people use in transactions is only a substitute for money proper, which traditionally has been gold and silver coin. The adverb “fully” means that every note issued is a claim ticket to a specified weight of gold stored in a bank warehouse.

Why is this arrangement sound? Because it makes the value of money depend on the profitability of mining gold, rather than the “politics of the hour,” as Mises put it. A money that’s sound means the money supply remains relatively stable.