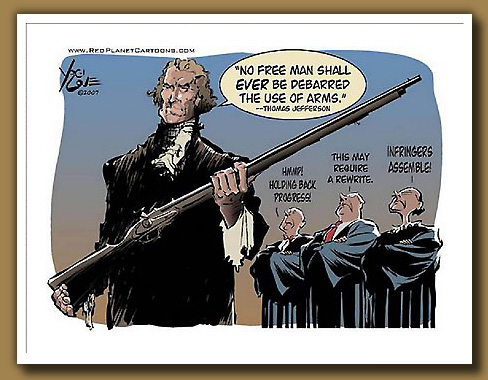 Nearly three years into President Obama’s first term in office, Michelle Obama finally said something with which I can agree.

At a recent fundraiser for President Obama’s re-election campaign in Providence, Rhode Island, the first lady told her audience:

“We stand at a fundamental crossroads for our country. You’re here because you know that in just 13 months, we’re going to make a choice that will impact our lives for decades to come … let’s not forget what it meant when my husband appointed those two brilliant Supreme Court justices … let’s not forget the impact that their decisions will have on our lives for decades to come.”

This was music to the ears of the small, affluent crowd of admirers who cheered and applauded. But to gun owners, Michelle Obama’s remarks should sound like a warning bell, alerting us to the danger ahead should Barack Obama win re-election and get the opportunity to alter the current make-up of the Supreme Court.

When Americans flock to the polls in 13 months, we will not simply decide which direction our country should take over the next four years. Rather, we will decide whether or not our fundamental, individual right to keep and bear arms will survive over the next several decades.

Currently, the Second Amendment clings to a 5-4 pro-freedom majority on the Supreme Court. Just one vote is all that stands between the America our Founding Fathers established and a radically different America that Barack Obama and his supporters envision.

Imagine how much easier it will be to herd those Americans who don't want to be slaves into the gulags, IF THEY AREN"T ARMED against the government's New Gestapo (law enforcement) and the soldiers (likely foreigners attached to some United Nations "peacekeeping force") who will be tasked to maintain "social order" or "preserve the peace" or support "public safety".

I'm not sure that moving to a warmer climate will assure survival, since there are many functional trains in the U.S., and it's not unlikely that those who don't seccumb to the idea of enslavement will be moved to the most remote regions of the country - those regions just happen to be in the (very cold) western states. However, while under seige, a person would be better able to survive in a less hostile climate. Still, if you can get to a colder climate, and your are "prepared" you might be able to avoid being rounded-up, in the first place:  It's hard to know exactly what to do, mostly because it's hard to know what form of treachery one is likely to be up against. The government knows what it's up to...Can you say the same?

Isn't it way past time for law enforcement around the nation, the State Governments, and the people, to pull these law breakers, and breakers of their sacred Oath of Office, out of Government, throw them in prison, and place people in office who will uphold the promise that they promised when they were sworn in?