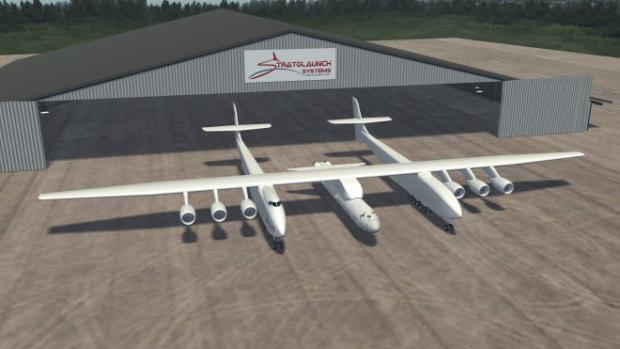 Microsoft co-founder Paul Allen raised a lot of eyebrows with his plan to build the largest airplane ever, then use it to launch rockets into space. But as wild as the idea of a six-engine airplane carrying a multi-stage rocket may be, it is evolutionary, not revolutionary.
Air-launched rockets have been around for more than 60 years, and airplanes have been launching payloads into orbit since the 1990s. Even Burt Rutan, the legendary aerospace designer working with Allen on Stratolaunch Systems, has a history with the technique. He designed the wing for an air launched rocket back in the 1980s as well as SpaceShipOne and its mother ship White Knight winning the X-Prize in 2004.

The only difference is the scale. Stratolaunch is taking air launches to a whole new level.

Allen and Rutan have proposed building an aircraft that features six Boeing 747 engines and a wingspan of 385 feet — more than 120 feet wider than an Airbus A380, currently the largest commercial passenger plane in service. It’s nearly 100 feet more wingspan than the Antonov An-225, the world’s largest airplane. The airplane will have a gross weight of 1.2 million pounds, including a 490,000-pound booster rocket being developed by SpaceX. The mothership will fly to an altitude of about 30,000 feet, then release the rocket. The aircraft will be designed and built by Scaled Composites.

Allen, the billionaire co-founder of Microsoft, joins super-wealthy entrepreneurs like Elon Musk, Richard Branson and Jeff Bezos in looking to the heavens for his next venture, as NASA turns to the private sector for help getting to space.

Stratolaunch is easily among the most ambitious proposals. But the idea behind it dates to the early days of aviation, when airships launched biplane fighters toward the end of World War I.

Then, as now, the idea was to maximize range, or payload, while minimizing the amount of fuel needed for a mission. In the earliest days of aviation, airplanes simply could not carry enough fuel for long flights in battle. These days, it’s about needing less fuel and optimizing a design for delivering a payload to orbit.

You kids need to read "Space Platform" by Murray Leinster, found in 2 ebook forms - epub and mobi, for Kindle - at http://arthursbookshelf.com/sci-fi/leinster/leinster.html

NASA 'going full force' to gear up for UFO study