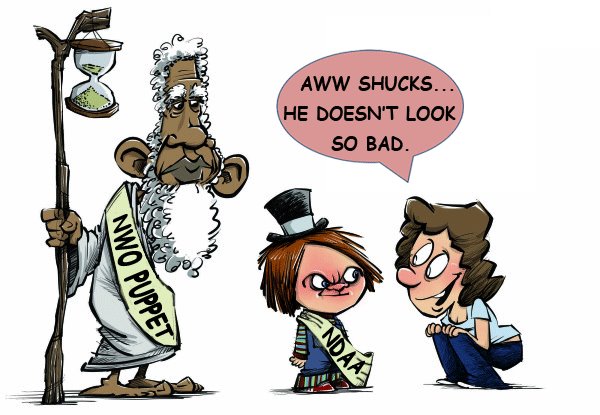 The National Defense Authorization Act for Fiscal Year 2012 is mind-boggling,


"The language which precluded the application of Section 1031 to American citizens was in the bill that we originally approved...and the administration asked us to remove the language which says that U.S. citizens and lawful residents would not be subject to this section," said Levin, Chairman of the Armed Services Committee.

Section 1031 of the NDAA bill, which itself defines the entirety of the United States as a "battlefield," allows American citizens to be snatched from the streets, carted off to a foreign detention camp and held indefinitely without trial. The bill states that "any person who has committed a belligerent act" faces indefinite detention, but no trial or evidence has to be presented, the White House merely needs to make the accusation.

An amendment introduced by Democratic Senator Feinstein, described as "cleverly worded nonsense" by Congressman Justin Amash, does not protect Americans from being subject to the provision.

"The Feinstein Amendment 1031(e) is dangerously misleading," writes John Wood of Change.org, which is running a petition to oppose the signing of the bill. "Don't be fooled: In the text of 1031(e), "Nothing in this section shall be construed...", the only word that matters is "construed" because the Supreme Court are the only ones with the power to construe the law. The Feinstein Amendment 1031(e) permits citizens to be imprisoned without evidence or a trial forever, if the Supreme Court does not EXPLICITLY repeal 1031."

The Obama administration never had a problem with Section 1031 of the bill and indeed acted to ensure it applied to American citizens. Doubts over whether or not Obama would veto the bill only arose out of issues with Section 1032, which pertains to the military being required to take custody of individuals.

"Confusingly, Obama threatened a veto for 1032, but NOT 1031. 1032 is UNRELATED to imprisoning citizens without a trial. Obama has never suggested using a veto to stop Section 1031 citizen imprisonment," writes Wood.

The notion that the administration lobbied for language that would have protected American citizens and legal residents from indefinite detention to be removed from the bill is unsurprising given Obama's policy with regard to predator drone strikes.

The White House has asserted the right to carry out state-sponsored assassination anywhere in the world without having to provide any evidence or go through any legal process. The administration merely has to state that the target is a terrorist and it doesn't matter whether they are an American citizen or not, as we saw in the case of American-born Anwar al-Awlaki and his son who were both killed earlier this year.

Indeed, at the start of the month, Obama administration lawyers reaffirmed their backing for state sponsored assassination.

Congress has until tomorrow to block the law before it heads to President Obama's desk. Putting faith in an administration that has formalized state-sponsored assassination of U.S. citizens without trial to block the 'indefinite detention' provision of the NDAA bill is naive to say the least.

In the Netherlands similar Snatch & Grab policies are in place;
The Dutch veteran Sietze Planting has been apprehended for no justifyable reason, being incarcerated without any charge or reason known to the public, nor to Planting himself.

Wednesday, December 14th, Planting will have some sort of court trial behind closed doors.
Normally these trials are publicly held. This time no one is allowed to witness his fate. All we know is the Dutch DOJ wants to subject Planting to a committed psychological examination, in which Planting refused to participate.

Just as in the United States, now also countries in Europe have similar policies in place which look like Bill S1867.

We will keep a very close eye to the Sietze Planting's case and are hoping he is not just dissappearing in a black hole as has been set by the NWO implemented LAW world wide.

Wake up people, this concerns you too. No one is safe under these regulations.
Constitutions are suspended and shredded, get that very good thru your minds.

The World Super State is nearing its completion, wake up the people around you!!!!

1 Comments in Response to "Hi, I'm Chucky, and I'm your friend till the end. Hidey-ho!"

So you think you want to trust Obama for another 4 years!

See the article at:

which reads in part, "President Barack Obama signed on New Year’s Eve a bill that gives the military authority to detain American citizens indefinitely and without criminal charge, breaking with the stroke of a pen one of his many campaign promises, even as he pledged that the new powers the bill grants will not be applied to U.S. citizens."

Then read the comments.