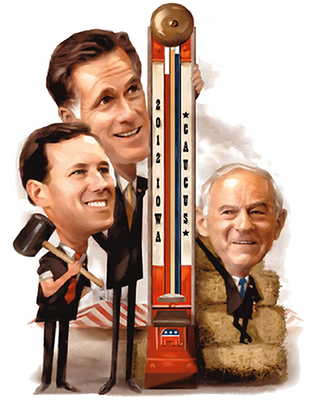 The precipitous slide was predicted by anyone who’s been watching the primary spectacle thus far, both because the "anyone-but-Romney" baton had already passed from Bachmann, to Perry, and to Cain before it was Gingrich’s turn; and because Gingrich’s string of mercenary compromises on key conservative issues over the years hamstrung him with Republican primary voters.

Incidentally, that latter revelation was inevitable – no matter how brightly the media coronation for Gingrich flashed, ever so briefly.

After all, Republican primary voters in 2012 seek a "conservative" standard bearer for president, as they say they do in every election. However, in this election, 2012, they seek a standard bearer against the backdrop of an apocalyptic, derivative-debt-driven fissure of instability in the global and U.S. economies; an endless hangover from eleven years of interventionist wars and fearful propaganda; the ubiquitous, depraved invasiveness of the TSA; the rising influence of Tea Party demands for spending cuts; and the teetering, precarious solvency of the United States government itself.

If Republican voters don’t mean it this time, they never will.

We live in a period in history during which the status quo is particularly indefensible. Joe Q. Public knows this, too, inherently, despite organized media’s attempts to distract him with noisy irrelevancies. Any candidate representing or even appearing to defend the status quo will suffer in the polls accordingly: thus, five Flavors of the Month, "anybody-but-Romney" establishment ("Frontrunner!") candidates so far in 2011, and the voting hasn’t even begun.

The only interesting and surprising aspect of Newt’s particular breakdown is the timing. His collapse commenced with only a few short weeks remaining before the Iowa caucuses – not enough time to introduce another "frontrunner." You have to believe that the GOP establishment certainly would’ve preferred that Newt ride out his turn through an Iowa victory over Ron Paul before ultimately, and graciously, sacrificing his supporters to Romney, post-New Hampshire.