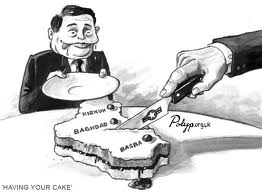 Would you sacrifice your firstborn son to establish a democracy in country that had a dictatorship? How about giving up your son to effect a regime change? What about exchanging your son to end the oppression of minorities? How about trading your son in return for a country holding elections?

I don’t know of any American mother or father that would do such a thing. I wouldn’t give a finger from one of my sons to do any of these things. Some Americans, however, wouldn’t mind it if some other American’s son came back from some foreign war in a box with only a finger that was recognizable – just as long as it wasn’t their son.

Now that the war in Iraq is officially over, I keep hearing from apologists for the war about how it was worth it. I keep hearing that because Saddam Hussein is gone, Iraq has a Constitution, Iraqis have freedom, and Iraq holds elections that all the death and destruction was worth it. "We are leaving behind a sovereign, stable and self-reliant Iraq, with a representative government that was elected by its people," President Obama told the troops at Fort Bragg. "I think the price has been worth it, to establish a stable government in a very important region of the world," said Defense Secretary Leon Panetta. Of course, none of Panetta’s three sons died in Iraq.

1 Comments in Response to Was It Worth It?

How about sending your first-born to die for a country that tortures its own people, that locks up their own citizens without charges-legal representation- trial-or any judicial review, that searches and feels-up its citizens at will, that conducts medical, chemical, and biological experiments on its citizens without telling them, that takes the wealth of its citizens at gun-point, that enslaves its people with failed solicialism, etc., etc.?